Community kicks off a new fundraiser 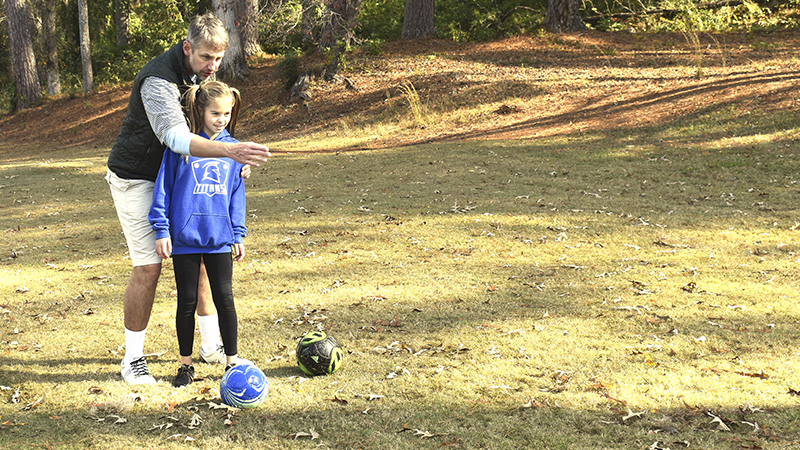 Foot golf has players use a golf course to kick soccer balls into larger set up holes.

In addition to fundraising with the tournament, raffles and shirts, the team also let players pay for re-tries at certain holes, Knight said.

“We’ve sold mulligans, which are if someone has a mistake, they can buy [one] and get a free kick,” Knight said.

Knight said the event not only brought out players from the travel team, but also members of the community.

“We’ve had a lot of community support with this tournament. A lot of our sponsors are people who do not have affiliations with Titans,” she said. “We have a lot of players who might play for parks and recreation, or they may just be soccer fans. This has been a great tournament for the whole community, not just for the Troup Titans soccer club.”

According to participant Andy Fritchley, the event played like a golf game.

“This golf course, particularly the part we played on, is very old and it’s got a lot of hills, so it was a lot like golf,” Fritchley said. “You had to read what you were doing and say ‘hey I need to play it to the right because it’s going to break to the left.’ That part was really neat. I wasn’t expecting that.”

Participant Sandy Rockwell said playing on the golf course was unusual and enjoyable.

“The course plays a little different playing with a soccer ball that’s for sure,” Rockwell said. “I think it’s a lot of fun. It’s the first time I’ve ever played it, so it’s great.”

Frichtley said playing against all ages was interesting.

“It’s really neat to see 7 and 8-year-olds playing along with adults on the same team or right next to (each other). That’s a really neat part of this,” he said. “These kids can really play soccer. These kids are really good at the sport.”

Participant Colin Ross said he wishes the club will hold the event again next year.

“This is something [Frichtley and I] hope that they continue to do because everybody can do it, all ages of kids,” Ross said.

Knight said because of the success of the day, the club will hopefully do this next year.

“We have beautiful weather, a lot of excitement, great turnout so I think we’ll definitely do this tournament again,” she said.

LaGrange shows off its talent