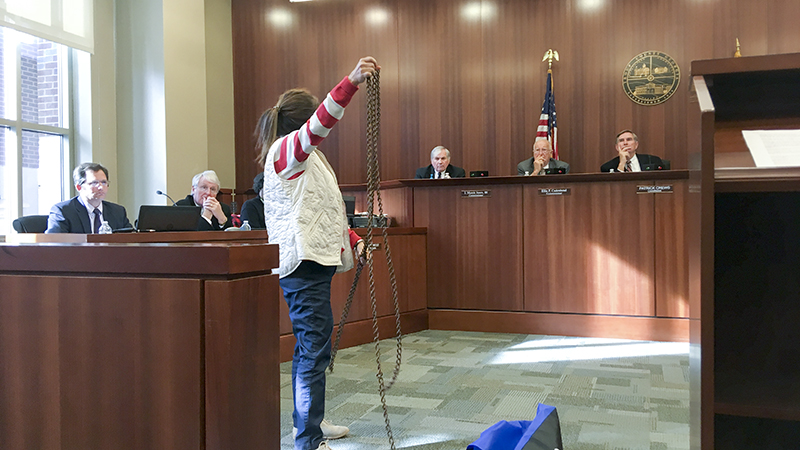 In a unanimous decision, the Troup County Board of Commissioners voted Tuesday to amend the county’s Animal Control Ordinance, effectively banning the chaining of dogs within the county.

During its regular meeting on Tuesday, the commission voted on an amendment to the Animal Control Ordinance that now states that “the only manner that any dog may be physically restrained outdoors, other than by a leash or lead or fenced area, shall be a trolley system.” This update is the result of months of discussions with local groups on the possible downsides to single point tethering systems — including the ability for animal control officers to investigate suspected animal abuse — and the marshals were asked to focus on education with the update.

“We want to use this as a tool to educate our citizens,” County Commission Chairman Patrick Crews said. “Tomorrow we won’t be asking the chief and animal control to hit the road looking for everybody in Troup County. This will be an opportunity to educate those people as we go. If they are in need, we are asking the citizens to let us know. We’ve got groups like Evie (Ketler) and others who will help. I think even our sheriff dug some fence holes, so there are citizens in the community who will help.”

In fact, owners will have 90 days from first contact to set up a fence or trolley system for pets. Groups of citizens have shown their support for the change at several commission meetings, and Tuesday was no different.

“I am here representing the over 24,000 people on our petition and the over 600 people on our Facebook page,” said Ketler, the citizen who first brought the issue to the commission’s attention. “Why the change? Virtually all animal welfare organizations oppose tethering. While an anti-tether law may inconvenience a few people, the benefits outweigh the costs. The local government must weigh public safety against a small group of individuals who prefer to keep their dogs chained.”

During an earlier meeting, the board of commissioners heard a report on the progress of LaGrange’s ordinance, which bans single-point tethering, which went into effect last year. Capt. Mike Pheil of the LaGrange Police Department emphasized the role of education and working with dog owners at that time and spoke favorably about the ordinance as a whole due to increased ability to check animal welfare.

“We are coming to make an amendment on the ordinance that we already have in place, so by moving in the direction that we are moving in as a county, I think that we are addressing and looking at situations,” Commissioner Morris Jones said. “It gives a little more teeth (for the marshal’s office to check and enforce animal complaints) as far as what we had in the past.”

All three cities in the county — as well as several nearby counties — already had some sort of ordinance regarding tethering in place, so the change will primarily impact unincorporated Troup County. Some of the participants in Tuesday’s meeting expressed hopes that the ordinance will improve people’s relationships with their pets and pointed out the suspected link between chaining and aggressiveness in dogs.

“The high majority of extreme and severe animal bites can generally be traced back — and this is documented by the [Center for Disease Control] and lots of other groups — to animals that have been chained and poorly socialized,” said Debra Berger, the state director of The Humane Society of the United States. “So, hopefully this will be more than just an anti-chaining ordinance. When these changes take place it is a great opportunity to not only inform the community about options, but make a lot of resources available. In Georgia so far, there has been over 80 communities that have passed an anti-tethering ordinance. Most recently, Cobb County did.”

That CDC data came from a 1996 study of one year’s data that showed that 22 percent of fatal dog injuries involved restrained dogs on the owner’s property.

The study stated that the proper socialization, training, care and treatment of a dog are the best preventive measures that owners can take to prevent dog bites. Pet owners who are found to be out of compliance will initially receive a warning and an explanation of what is allowed and why. If they do not come into compliance within 90 days, then they will face fines, or depending on the circumstances, other penalties.

“Some of it is simply a lack of education,” Ketler said. “Sometimes people behave in certain ways because they’ve never considered an alternative.”

Ketler founded a local charity, Paws for Chainge, earlier this year in order to build fences for dog owners who cannot afford to build them on their own and has already built two fences for local families with the help of volunteers.

The primary hesitation on the part of the commissioners throughout the process was a desire not to overburden residents with costs related to the updated ordinance, but with trolley systems available at multiple locations throughout the county for around $20 and a local charity assisting dog owners, even commissioners that initially opposed the change voted in favor of the update.

“If you are helping them with the ordinance then that is all I need,” Commissioner Richard English said.

The Troup County Board of Commissioners is scheduled to meet again on Dec. 5 at 9 a.m. at 100 Ridley Avenue.