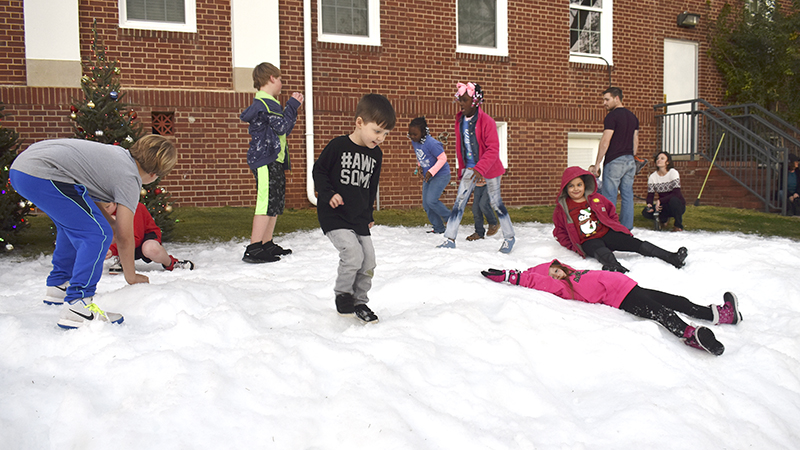 Children play in the snow at LaGrange College’s Christmas on the Hill Tuesday night. --Gabrielle Jansen

All were festive last night at LaGrange College’s annual Christmas on the Hill. The annual community event brought hundreds of people out to the college to participate in activities such as sledding down a snow-covered slide and meeting Santa.

LaGrange College news and features writer Debby Baker said the Christmas event has been going on for years, but it has been open to the community for the last six years. She said it helps students celebrate Christmas before finals week.

“Christmas on the Hill is an event the college sponsors to welcome the community up on the hill for lots of holiday fun. It’s kind of like our kickoff for the holiday season,” Baker said. “I don’t think we’ve ever had it in November before. It’s just the way that the holidays fell this year.”

Last year’s event was canceled due to rain, Baker said.

“Last year we were rained out for the very first time and that was heartbreaking,” she said.

The event had live reindeer for people to observe before taking photos with Santa. LaGrange College student Kevin Millevoi said that was his favorite part of the event.

There were tables for children to write letters to Santa and make snow globes.

The event even had a hill covered in snow for children to make snow angels and throw snowballs at each other.

Sherry Hill said brought her daughter, Lily, and they both enjoyed the event.

“We saw Santa, and we played in the snow for a minute. It was cold,” Hill said. “We’re having fun. It’s an awesome [thing] they do for the community for the kids.”

The Christmas tree was lit by LaGrange College President Dan McAlexander and the Young Singers of West Georgia performed some holiday songs after the lighting.