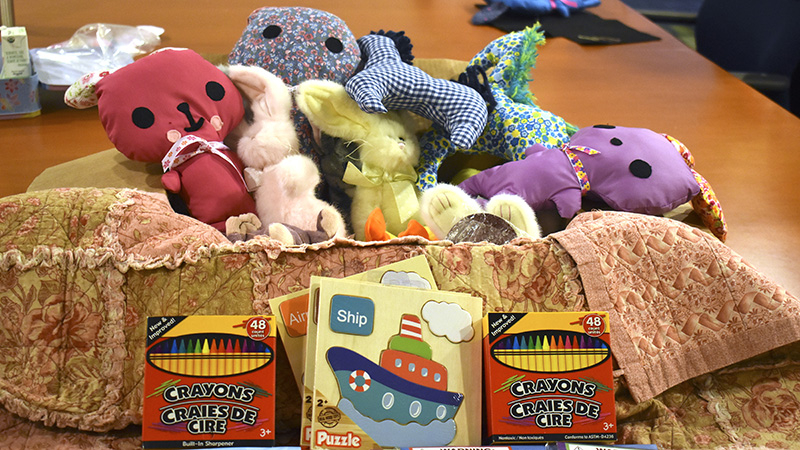 Even though it’s been more than two months since Hurricane Maria passed through Puerto Rico, a local craft group has kept its victims in mind. The Crafty Lunch Crew is making and sending stuffed animals and toys to children affected by the hurricane for Christmas.

Club member Francis Daniel said she and Leslie Collier wanted to immediately do something for the victims of Hurricane Harvey but did not have a way to contact someone. After Hurricane Maria took place, Daniel made contact with a friend from New Community Church, which was already helping families in Puerto Rico.

“My church was already sending boxes to families in Puerto Rico and so then I asked my friend at the church,” Daniel said. “I said ‘so hey, how about we send some kid items?’”

Approximately 15 stuffed animals were made that will be sent along with donated toys and coloring books. The group is already preparing to send four medium sized boxes to give to the children, Daniel said.

“The hope is to do more, maybe a valentine or something,” she said.

The craft group meets weekly at the LaGrange Memorial Library. Collier said they make crafts for all of the community, such as recently taking plastic bags and making them into mats for the homeless.

“We’ve been learning how to do a little bit of anything we can do,” Collier said.

“We’ve been trying to do things that are good for the community.”

The group takes donations from the community to make their items. Daniel said they took scrap fabrics for the stuffed horses and bunnies they are making to send to Puerto Rico.

There are about eight to ten members who meet weekly. Club member Heather Bostick said they learn how to do certain things, like sewing from each other.

“It’s just learning how to do new things and hopefully being able to put some other stuff together people can use,” Bostick said.

As for this week’s project, Daniel said it was all Collier who made it possible.

“She’s a crafty person and I know how to get the boxes,” Daniel said.

The Crafty Lunch Crew meets every week at LaGrange Memorial Library at 11:30 a.m.