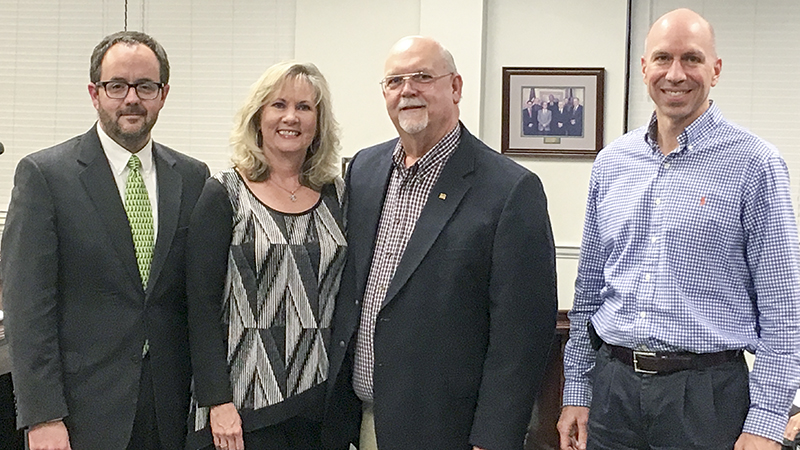 Barry Johnson poses with members of the city council.

Being a government employee is often known as a thankless job, but on Tuesday, the City of LaGrange made a point of celebrating an employee who has served the city for 25 years.

On Tuesday, the LaGrange City Council recognized Customer Service Manager Barry Johnson for the work that he has done in his 25 years of service to the city.

“Barry (Johnson) is the perfect example of how loyalty to an organization combined with hard work leads to opportunities for career advancement,” Mayor Jim Thornton said.

Johnson was commended for decreasing turnover, decreasing the number of billing errors and maintaining the city’s standards in such a way that the city has been recognized for its utility services in annual statewide reports. He was also recognized for the hard work that he does every week working with citizens and resolving utility concerns.

“That is one of the toughest jobs in the city except for maybe our police and our firemen, and Barry (Johnson) might argue that it is just as difficult,” Utilities Director Patrick Bowie said. “He is dealing with people who are in difficult situations a lot of times when they do have to come to the office. He is having to balance the compassion that he feels for their situation with the economic interest of the city and looking for win-win situations. Most of the time Barry and his staff can come up with solutions that help the customer and help the city, so we appreciate all that he does all the time.”

Meanwhile, Johnson was just thankful for the opportunity that the city provided.