Aleman gave up work as graphic artist to fight fires 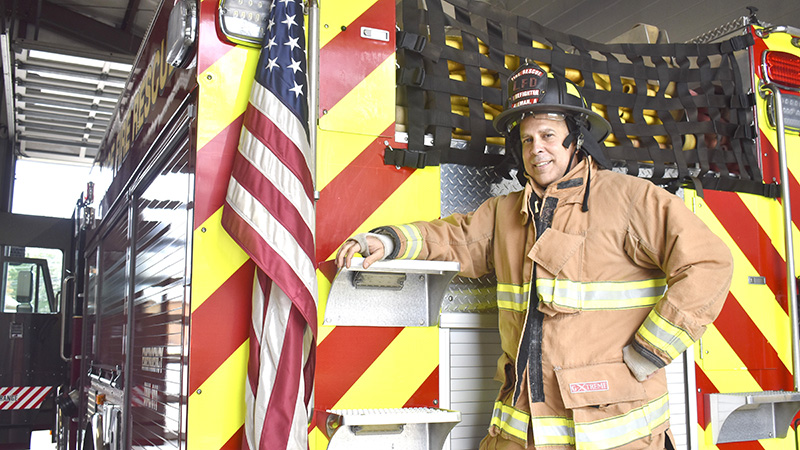 LaGrange firefighter Alex Aleman poses for a photo this week at the LaGrange Fire Department. Aleman has worked for the LFD for nine years and for American Medical Response for six years. --Gabrielle Jansen

For LaGrange firefighter and paramedic Alex Aleman, his current job and past career as a graphic artist have a few things in common.

Aleman worked as a graphic artist and cartoonist for more than 20 years in Miami. He said he worked for a company that served major corporations.

“I worked for a company, that did a lot of apparel business with Disney, Warner Brothers, all the theme parks,” he said. “We also covered all the major league sports and all the college sports.”

The LaGrange resident has worked for the local fire department for nine years and for American Medical Response for six years.

“I always liked the idea of being a firefighter because my best friend is a firefighter in Miami,” Aleman said. “He tried to convince me to join the fire force when they first opened up, but I was kind of happy being a cartoonist. It was a fun job, you got to go to work every day in T-shirts and shorts and sneakers, real casual, and just draw cartoons all day and get paid for it.”

Him and his wife, Cheri, moved to LaGrange almost 11 years ago.

“That was fun, but once my wife had a triple organ transplant, and she was in sales which is a high stress job, she wanted to move to Georgia because I guess the cost of living is cheaper if only one of us is working,” Aleman said. “We decided to visit the area around Thanksgiving because we came with some friends. We fell in live with the area.”

Aleman said he decided to apply with the LaGrange Fire Department when he heard they were hiring.

“At that time, I was 42 (years-old). Before I tried, I asked around to see what would increase my chances, see what they were looking for and they said that they actually run a lot more medical calls than they do fires so it would help my chances if I was an [emergency medical technician],” he said. “So, I enrolled in EMT school before I applied for the fire department, and I got my Emergency Medical Technician-Intermediate about three months after I was hired here. About two years after that I went out for my paramedic and I really enjoy the whole medical side.”

The firefighter still puts his drawing skills to use such as designing the Chiefs Challenge T-shirts and the AMR float for the LaGrange Christmas Parade.

“Once people around here started figuring out I could draw there were all ‘oh, could you do this for me? Could you do that for me,’” he said.

He said that firefighting can be enjoyable because of the importance of the job, he prefers paramedic work, which can potentially involve saving someone’s life during a medical emergency.

“It’s exciting to fight the fire, but on the downside, someone just lost their house. Whereas on the medical side, you’re trying to help someone it’s a bad off situation,” Aleman said. “But when you get a pulse back, and they start breathing back on their own and then a few days later when you check up on them in the hospital, they’re doing well, that’s the big rush. I think I enjoy that more than the firefighting side because you’re saving a life rather than seeing someone’s house burn down.”