LFD deputy chief to retire after 30 years of service 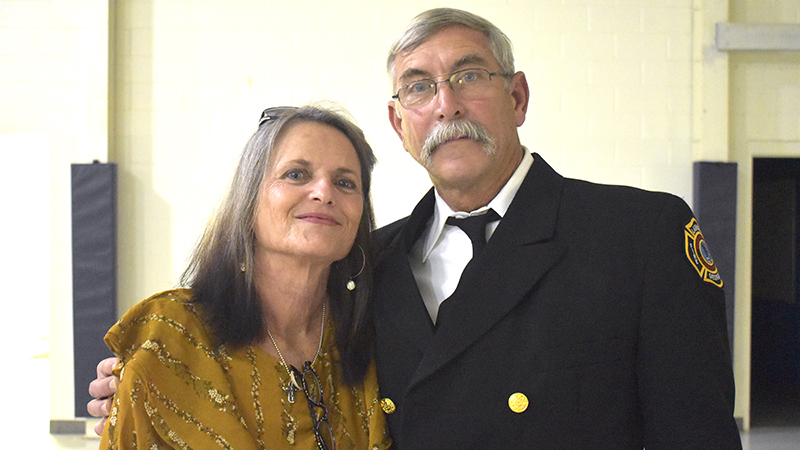 LaGrange Fire Department Chief Deputy Robert Taylor poses with his wife, Laural Taylor. He has served with the LFD for 30 years.--Gabrielle Jansen

LaGrange Fire Department Deputy Chief Robert Taylor is retiring from the department after serving for 30 years.

As deputy chief of suppression, Taylor managed shifts with 17 to 18 firefighters.

Deputy Chief Willie Bradfield said when he started at the LFD almost 19 years ago, Taylor helped show him the ropes.

“He’s just a great guy. He’s caring, really supportive,” Bradfield said. “When I started, I was a firefighter here, so he was always there to lend his experience. [He would] kind of give advice on how to do different things around the department.”

Deputy Chief John Brant said Taylor was a great leader for the department. He always helped others with work related or personal issues, Brant said.

“I know he was dedicated to the fire department, dedicated to the people,” Brant said. “I was just always impressed with his [background], command and just the way he handled the fire scene. That part of it was most impressive to me. He served the citizens of LaGrange for 30 years, and he did it in a way that’s supposed to be done. He was always there to help people, and he loved the fire department.”

Bradfield said Taylor is also an experienced carpenter and built work stations at the all of the department’s separate stations.

Taylor even remodeled the station on Aerotron Parkway after it was acquired from the Troup County Fire Department, he said.

Taylor joked that the biggest thing he’s looking forward to with retirement was sleep.

“The firemen don’t get any sleep. They very rarely get to sleep. Basically, they’ll have 15 to 20 calls a shift,” Taylor said. “By the time they come back in after a call, it’s an hour and then they’ve got an hours’ worth of reports to do and, basically, if they can put their heads down for a couple of hours, they’re good.”

Taylor said he’ll always value the friendships he made at the fire department and the skills he learned.

“We’ve got a brotherhood, and we still hold family values up there, and we still eat breakfast, lunch and dinner together as a group,” he said. “Of course, coming up to 30 years, you learn the aspects of the fire and the medical. We’re all medically trained, and we just do what we need to do.”

Brant said it won’t be the same without Taylor around.

“He’s a great guy, great person, great friend,” Brant said. “He was a great leader for us. (He) loved the city of LaGrange, and he’ll be missed.”