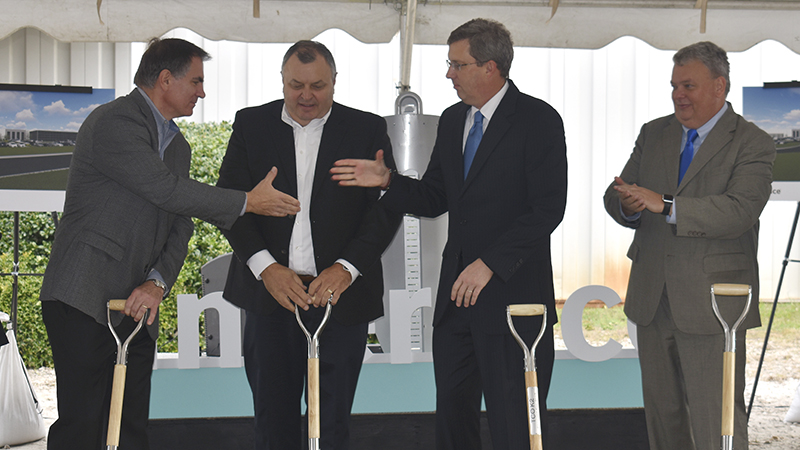 Interface held a ground-breaking ceremony Tuesday morning for its Kyle 2 plant expansion project. The expansion is meant to modernize the manufacturing plant, including making the plant more eco-friendly, according to President of Interface Americas Matt Miller.

“One of the things [the company has] decided to do here is take the opportunity to look at this built environment and say ‘how can we incorporate into the design and into the building of this facility elements that would make the building act like a forest, act like the local ecosystems,” Miller said. “So, we’ve looked at things like rain water and water use, use of carbon, access to light, lots of different things, and we’ve made a choice about what we’ve built into the design of this building. And we’re spending a fair amount of money on it. About $3 million of the total construction bill was going to just elements of the factory forest.”

The modular flooring company was founded in LaGrange in 1973 by West Point native Ray C. Anderson, who The Ray corridor on Interstate 85 is named after.

The expansion will add 45,000 feet for the plant. The Kyle 2 facility is named after Joseph H. Kyle, one of the company’s first officers.

The company has for a long time been focused on sustainability, according to Christine Needles, Senior Director of Global Communications and Public Relations for Interface.

“Ray Anderson is considered one of the forefathers of sustainable manufacturing movement. A lot of our work is focused not only on making beautiful products, but also making those products more sustainable for the environment,” Needles said.

Mission Zero is one of the more recent goals of the company, which is to have no negative environmental impact by 2020, Needles said.

“We’re well on our way to achieving that goal,” she said. “It’s by the effort of a lot of people, not just sustainability experts, but individual members of the team who work on the manufacturing floor who’ve introduced ideas on how to be more sustainable in what we do.”

The Interface LaGrange building was created in 1988. Miller said the groundbreaking shows the relationship of the company with Troup County.

“We’ve committed upward $50 million to invest in Troup County, and it’s really around reaffirming our commitment to Troup County, the city of LaGrange, the city of West Point, the community as a whole and our employees,” Miller said.

The company operates in 110 countries and has additional manufacturing plants in Australia, China, Thailand, the Netherlands and Northern Ireland. The company currently has 1,200 employees in Troup County and 3,200 globally, according to Needles

Out of all the plants in Interface, Miller believes the LaGrange plant is top-notch.

“We have six manufacturing facilities around the globe. We have one here, we have two in Europe, and we have three in Asia. I think this is the best,” he said. “And one of the things I do know, having working with a lot of people, sales people are pretty competitive. They like to win, but I tell you what, there aren’t any people more competitive than supply chain and manufacturing operations people. So, we’re the best, let’s keep it that way and this is part of that.”

LaGrange Mayor Jim Thornton said the company is one of LaGrange’s success stories because it has expanded around the world and is sustainable.

“We think that is a great testament to your company. We also would like to think it’s a great testimony to LaGrange and Troup County that we are a great place to do business,” Thornton said. “It’s not just about going out and recruiting new businesses, it’s about supporting our existing businesses. And so, we are delighted that this is another example of that and it is significant to our community.”

Needles said the company appreciates its relationship with the community of Troup County.

“We appreciate the community here in Troup County and we feel like we’ve been good contributors to the community. This just shows our firm commitment and helping to support this community, keeping our manufacturing facilities here, modernizing what we do, looking to the future, so that we can continue to drive growth here in Troup County, but also globally for us as a business,” she said. “So it’s super exciting.”