TCSO captain to retire, lieutenant to fill his role 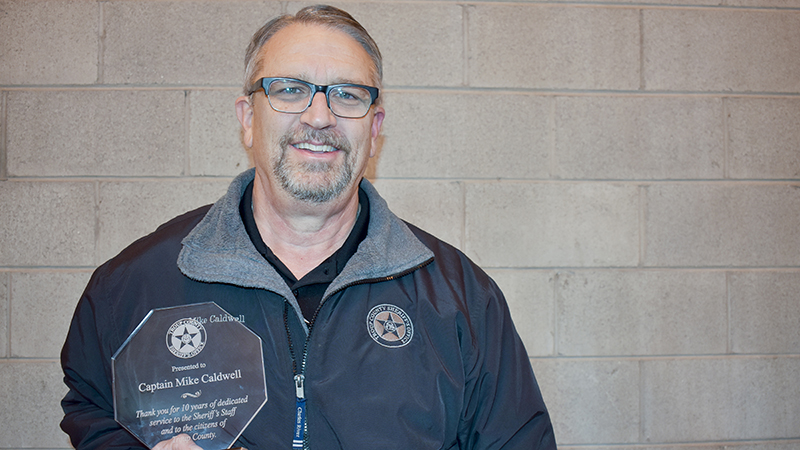 The Troup County Sheriff’s Office announced the retirement of Captain Mike Caldwell and the promotion of his successor, Lt. Kelli Ellington at its annual Christmas luncheon Thursday. Caldwell served 10 years with the TCSO, but approximately 40 years overall including his work with the LaGrange Police Department and as a deputy sheriff in Houston.

Caldwell said he will miss his coworkers, but is looking forward to no longer being on-call.

“I’ve constantly been on-call. When you’re in this position here, you never can get a good night’s sleep, the phone goes off, you have to go out,” Caldwell said. “This has been going on for like 25 years. So, I’m going to turn my phones off for a while and just get some peace. It’s been interesting, it’s been fun and I’m sure I’ll miss it.”

Caldwell said his plans for retirement include working around his house and spending time with his two teenage children.

“I have four children. Two of my youngest are still in school here,” he said. “So, I’m going to take them back and forth to school like an Uber driver I guess, and do things around the house I haven’t been able to do.”

As a captain, Caldwell was the chief investigator who oversaw the criminal investigation division. He previously served as a sergeant for the office.

“We handled a number of serious crimes within the last five years and I can say we had a 100 percent clearance rate on all the homicides we were [involved with],” he said.

Sheriff James Woodruff said he will be missed.

“He’s a good man, all around good person, very intelligent, a great addition to our team, but we wish him well in his retirement,” Woodruff said.

Ellington has served with the TCSO for 21 years and had worked in investigations for 18 years. She said she’s excited to take over the position from Caldwell.

“I look forward to being over all my guys, my investigators,” Ellington said.

Woodruff said Ellington was an easy choice for the position.

“Kelli’s done a tremendous job as our second in command in our CID. [She] does great with our child cases, and does great working with our female victims of crimes,” he said. “So, when Mike announced he was going to retire, we just knew exactly who would fit the bill. Kelli will do well as our new commander in CID and we’re so proud of her and her promotion.”

Ellington joked she’s glad she is now at the same rank as her husband, Mike.

“I’m going to be even with my husband now because he’s the captain over patrol,” she said.