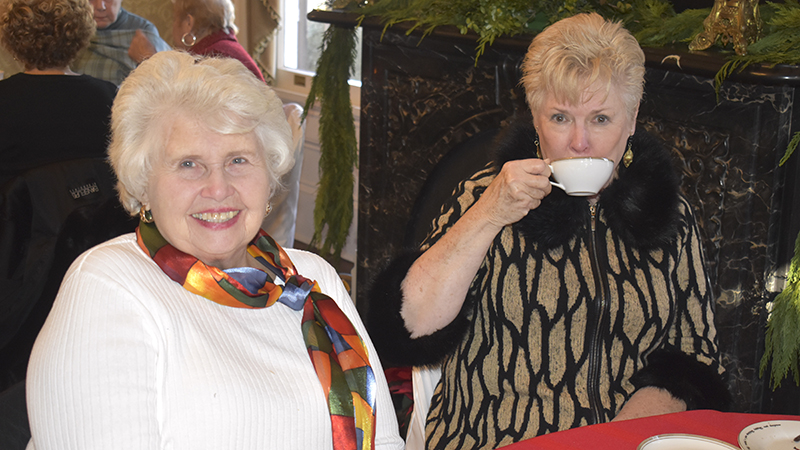 Betty Lester and Joanna Flynn pose for a photo with their tea.--Gabrielle Jansen

Pinky fingers were raised along with donations for Bellevue at the LaGrange Woman’s Club Christmas Tea Sunday afternoon.

Club trustee Kathren Fogg said the upkeep of Bellevue is expensive and all the proceeds go to the house. She said the yearly fundraiser is a project of the women’s charitable trust.

Bellevue was built around 1853 and was the home to Benjamin Harvey Hill. He was a local lawyer before becoming a U.S. senator and later a confederate senator.

The house was later bought by Jesse McClendon in 1869. It was given to the LaGrange Women’s Club in 1941 after it was sold to the Fuller E. Callaway Foundation.

The club has held the Christmas tea for 12 years now. Fogg said the charitable trust makes decisions about the house.

Club members have some connection to Bellevue, Fogg said.

“We have a lot of members who got married here, have wedding receptions here, who’ve had prom parties here, showers. A lot of the people here have connections to it one way or another,” she said. “But then, most of us are history lovers, so we love hearing and learning new things about events that took place here at the house in Benjamin Harvey Hill’s era. And we’re always discovering new things.”

Members of the club additionally brought their daughters and granddaughters to make new traditions, according to Fogg.

“We like to encourage ladies to bring their daughters and granddaughters because I think it’s something special for them and they don’t have to travel out of town for that,” she said.

“The children seem to really enjoy it.”