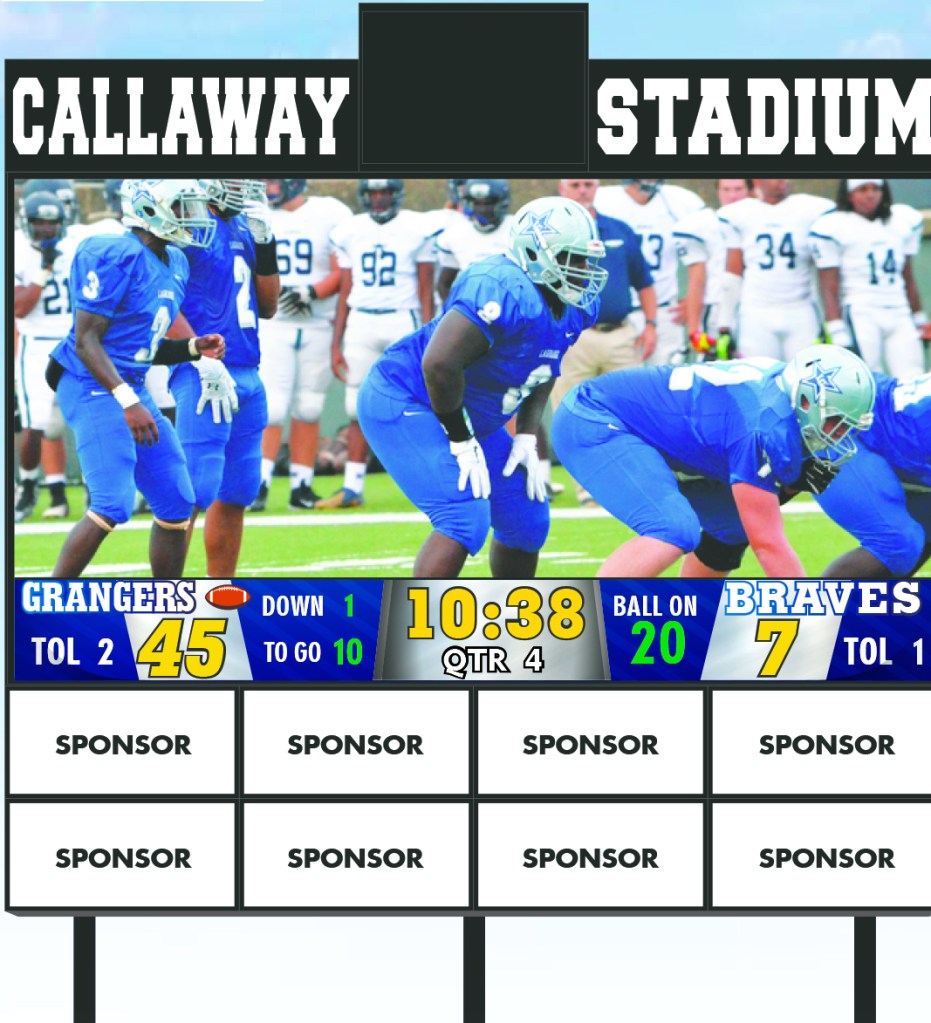 Callaway Stadium might be getting a brand-new scoreboard, with a large video screen that should enhance the viewing experience for anyone who attends events there.

“This facility is a very intricate part of our community. We have a ton of people coming through there, adults, children,” Rhodes said. “What we are trying to really do is catch up with other communities that share our likeness.”

“My goal would be to give them $50,000 and be done with it,” Jones said. “I don’t have any interest in spreading it out over five years.”

The stadium is used by Callaway High, Troup High, LaGrange High, LaGrange College and the local youth football teams. Each of the Troup County School System graduation ceremonies are also held at the stadium. Rhodes said about 160,000 people have attended an event at the stadium this year, and 115 games have been played there.

“The whole thing is going to be a video board, like a giant screen TV,” Rhodes said.

Rhodes said eight LED backlit sponsorships will be below the video board. The actual scoreboard can also be moved around on the new screen, rather than being stuck in one spot like on a traditional scoreboard.

The scoreboard currently in place at the stadium has gotten dated, Rhodes said, and it’s time to replace it.

“It’s becoming obsolete, and the wrong parts break on it, you won’t be able to get the replacement parts,” he said. “Those are old school where you have an old-style motherboard, and if that were to go, you’d be lucky if you could find a secondhand one somewhere to replace it.”

The old scoreboard will be completely removed. Rhodes said they might see if another school or community wants to use it.

Meanwhile, the new scoreboard will be used for more than just sporting events. It’ll give parents a chance at a closer look during graduation ceremonies and may also be used for special community events.

“Once we get this thing, on a Saturday night or a Friday night, we can have movie nights with families out at the stadium and show movies up on this big scoreboard,” Rhodes said. “When you say scoreboard, it’s really not. It’s really a giant, flatscreen TV.”

Jones said they looked at many options before asking the school system to contribute.

“Rest assured we have used extreme fidelity before we would come up and ask you all for a $50,000 donation for this,” Jones said.