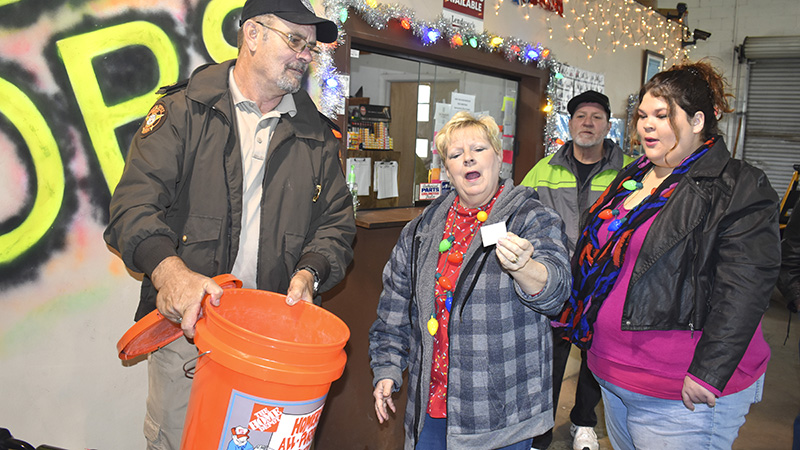 Leah Bishop-Rackow draws a name for the raffle. The Blue Knights sold more than 3,000 tickets for the ATV drawing.--Gabrielle Jansen

The Blue Knights of Georgia XVIII and L&L Motors auctioned away a 110cc four-wheeler to raise money for Court Appointed Special Advocates of Troup and Heard Counties, Inc. Friday morning.

The Blue Knights are an international law enforcement motorcycle club. The knights and L&L Motors have partnered for years to support CASA, according to club president Bobby Conway.

“We decided and we voted probably about three years ago that CASA was going to be the local charity that we supported through our club in the future. So, we do a ride each year, the third Saturday in March,” Conway said.

“Initially she came on board helping us support the ride,” he said. “And then this year, she approached us about donating a four-wheeler and us selling raffle tickets to help the kids when it came to Christmastime.”

CASA represents children in the legal system to make sure their basic need and rights are met, according to its website.

Conway said the group sold more than 3,000 tickets and that the money raised will go toward providing Christmas gifts for the children in CASA. While these is no total figure of how much was raised, he estimated it to be more than a couple thousand dollars.

“With that money, we are giving the children that are in CASA’s care, 12-years and older a gift card for Christmas, and then the smaller children we donate toys for,” Conway said. “The money left over from the toys for Christmas, we’re going to carry forward with that ride and donate it to CASA in March.”

“Right now, there’s 152 foster kids in Troup County they’re taking care of. And this whole raffle is to help raise money for them, make sure they have money for Christmas, buy Christmas gifts for the kids as well as to continue operating throughout the year,” Little said.

“We just want to support our local community, and there’s no better way than to support children,” Bishop-Rackow said.