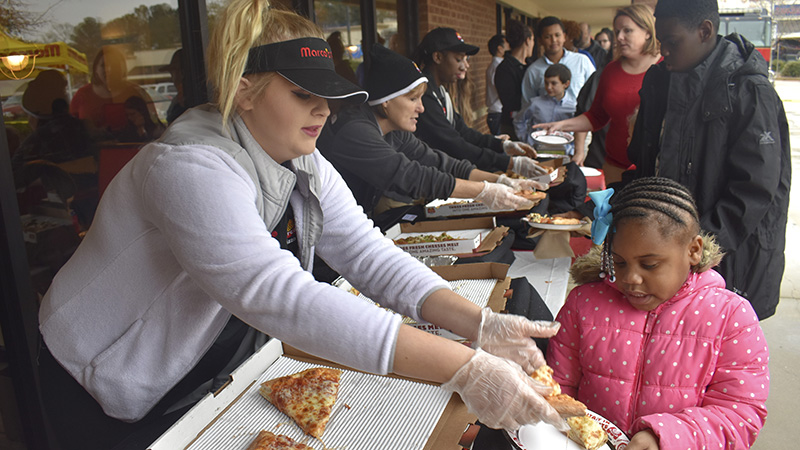 The rainy afternoon did not keep customers from going to the grand opening of Marco’s Pizza Sunday.

The pizza chain opened at the old Hog Heaven location on Lafayette Parkway.

“We haven’t advertised, so what we’ve done is doing it through word of mouth,” franchisee Chris Lopez said. “Some young folks first came in at the beginning of the week, we just had them take a picture of their food or cup and just say ‘Marco’s is now open.’ We just started more of a viral grass roots to kind of hear from our customers how they think of it, so it’s more authentic when they tell somebody the pizza’s good rather than me put an ad in there. We felt that a very strong initial viral campaign was going to be successful.”

The store gave out free pizza and had bounce houses and a DJ at the opening. Local store marketing department employee for the chain, John Joldrichsen, said he thought the opening was great.

“We make our dough fresh every day. We’re very scientific with the dough. We make small batches of pizza sauce every day, and that’s what makes it fresh. One more thing is our cheese. Our cheese is never frozen, so it goes on fresh,” Lopez said. “If anything, everything that you taste in here is going to have a more of an Italian theme to it.”

Joldrichsen said the company started in 1978 in Ohio.

“We have 900 stores nationwide, and we continue to grow,” he said.

Terry Stanford said he brought his family to the opening because he enjoyed eating there the day before.

“I went yesterday and it was good, so we brought them back so they could try it,” Stanford said. “The only bad thing we had here was the weather, but [the opening] was awesome though.”