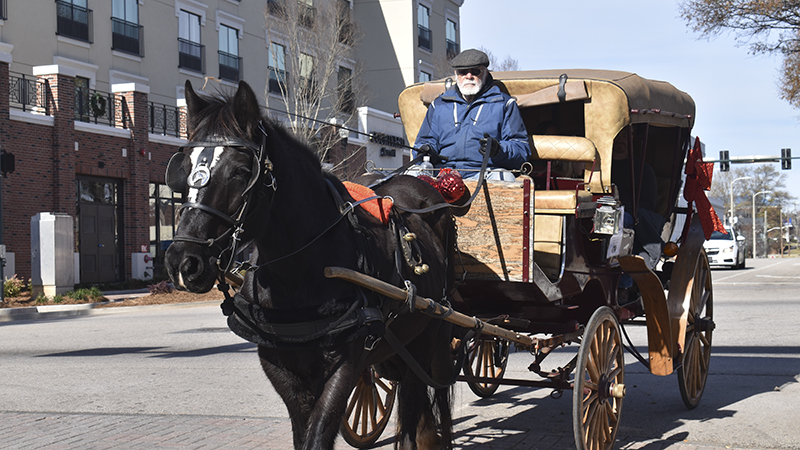 A horse drawn carriage drives through downtown LaGrange on Saturday. The Downtown Development Authority is sponsoring the free carriage rides during the holidays, though riders are encouraged to tip the driver and kiss the horse. (Gabrielle Jansen | LaGrange Daily News)

For some it’s a new tradition, while for others it’s continuing one. People patiently lined up on Vernon Street Saturday afternoon to partake in free carriage rides downtown.

LaGrange resident Vickie Crenshaw said the carriage rides have become a tradition for her and her daughter, Sydnee Harrison.

“We had just started coming since they [started the rides], and we love to come down here and take pictures and see Santa Claus and see the tree (on the Chamber Plaza). We love the different decorations on the tree,” Crenshaw said. “We were on our way out of town, and we wanted to make sure we didn’t miss it this year.”

Crenshaw said the ride makes residents take in parts of downtown that normally get missed in a car.

“It’s so much more fun. It’s a slower ride, for one thing, if you’re not having to paying attention, you can just enjoy the scenery,” she said. “We love the rides and the decorations and just being able to take it all in and enjoy the view. It’s like a step back in time for us, so I love that.”

Crenshaw said Sydnee’s favorite thing about the ride was feeding the horse.

First-time rider Jimmie Simons said he would have preferred for the carriage ride to have been longer.

“The only thing I would do is maybe two carriages and make the ride twice as long. It’s not long enough to get much really feel,” Simons said. “It’s not bad, but now that the town is spread [out] it ought to go down toward the brewery.”

Dodge City, Kansas, resident Jim Harrelson said he was visiting his grandchildren when they decided to try the carriage rides. He said it was a good way to slow down.

“I’m a historian, and I just enjoy doing things that people used to do a long time ago. So, you think about how people got around 200 years ago, that’s how they did it,” Harrelson said. “It’s just leisurely, it’s relaxed, its less rushed. It just slows you down. We need to slow down this time of year.”

At the same time, mini-carriage rides were held for children at Lafayette Square and Santa Claus. Brittany Wynne said it was the first time she brought her children to that event.

“[My] kids have seen it come and go, and they just wanted to check it out,” Wynne said. “Also, Santa is here, he draws a crowd.”