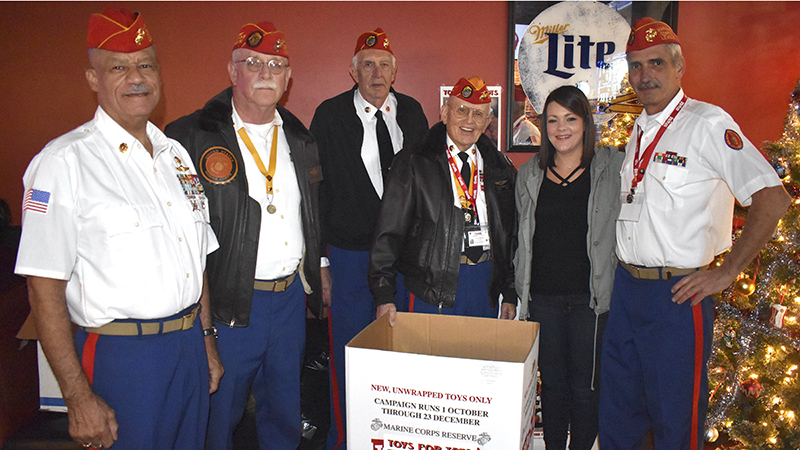 Sixty toys and stocking stuffers were donated at the Tunes for Tots concert at Main Street Pub Saturday night.

The event included a DJ and multiple bands performed and gave the opportunity for those who attended to donate a toy or money for the Toys for Tots drive.

“Our cutoff date is predicated on when they’re going to deliver our toys.”

Bledsoe said as of Monday afternoon, they did not know how much money they raised.

This was the seventh time Tunes for Tots was held, according to Bledsoe.

“(Tunes for Tots organizer) Josh East, several years ago, came to us and said ‘I can find a place, and I can get bands to have a Tunes for Tots, and we’ll just ask everybody to bring a toy.’ For years, whatever location he can get, and whatever bands he lined up, he’s had Tunes for Tots,” he said.

“And this year we got this location and I think we got four bands lined up.”

East said the show helps with the toy drive.

“We’ve done it for seven years and it’s always such a big impact on the Toys for Tots thing that it’s a huge feeling to be a part of,” East said.

“We’re here to have a good time and help out with a good cause,” East said. “Everybody donates their time and effort for it.”

The local agencies that give the toys usually serve 1,200 to 1,400 children every Christmas. Bledsoe said the local toy drive grows every year.

“Every year, there is somebody else that calls up and says ‘can I be a part of it?’ And we’re delighted, and it’s grown every year,” he said.

“People always ask me what is my goal. It’s as many toys as I can get. If a family gets two toys for a kid, it’s a Christmas, but if they can get four toys for kids, it’s a better Christmas. We estimate what we can get, and that’s conservative enough so we can reach that goal and then we try to get every toy we can get.”