Kid Mayor tries out second segment of The Thread 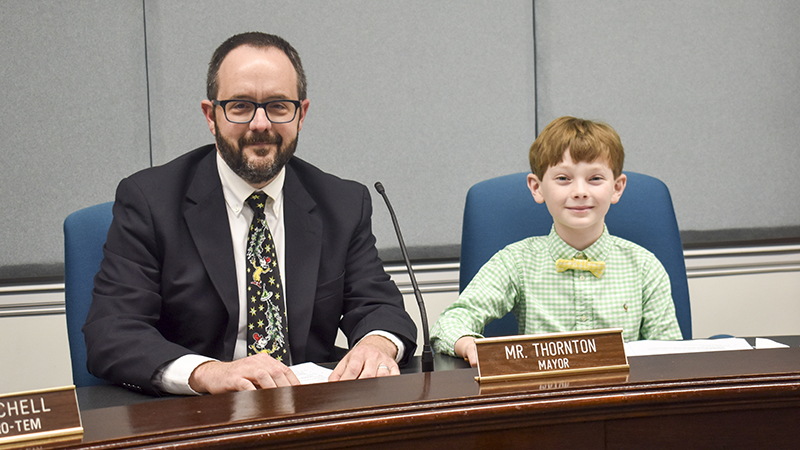 The second segment of The Thread isn’t quite done yet, but on Thursday, four local children rode new bicycles down the newly constructed trail.

The bike ride was part of the festivities surrounding Martin Zachry’s experience as the mayor for the day, and he along with three local children who live near the newest addition to The Thread became the first to ride on the section.

“We found three awesome kids that live right here on this trail section — this is going to go right by your house when it continues through Eastside Park,” City Planner Leigh Threadgill said.

Mayor Martin’s parents provided his bicycle, and the bicycles for the other three children received two bikes donated by Lewallen Construction Co. that is over the project and one bike that was donated by The Friends of the Thread.

“I can ride my bike every day to get exercise,” said Madison Allen, 7-years-old, one of the children who rode on The Thread.

The young acting mayor offered some insight into the impact that he thinks the trail will have on local children.

“I think that they’ll be able to exercise more, and they’ll have somewhere fun to just walk around on miles and miles of sidewalk,” Mayor Martin said.

The children who were asked to take part in the ceremony were chosen because of their home’s location near the trail, and in the short time after they received their new bikes, they were already practically flying up and down the completed section of the trail.

“I think they are going to enjoy it,” said Chiquita Robinson, the children’s mother. “I think it is going to give them something to do, some more exercise, some more playtime.”

The second segment of The Thread officially broke ground in September and is expected to be complete early in 2018. The 50-foot steel bridge spanning Blue John Creek was put in place on Thursday morning, marking a large visible step toward the trail’s completion. The trail segment still requires additional grading in some sections and concrete to be poured on the Eastside Park side of Blue John’s Creek. Extensive landscaping is also planned along the trail segment.

Along with his ride on The Thread, Mayor Martin also visited the LaGrange Police Department, Great Wolf and city hall to learn about how the city works and how the city is growing.

“Probably, The Thread [was my favorite] and I also liked the police station,” Mayor Martin said.

Mayor Martin was able to participate in the mayor for a day event thanks to city participation in a humane society fundraiser in August.

“I donated to the LaGrange-Troup County Humane Society for the auction in August a ‘Mayor for the Day’ experience,” Mayor Jim Thornton said. “That particular experience was purchased by a family here in town. … So, today I have been honored to have Martin serve as the mayor for the day.”