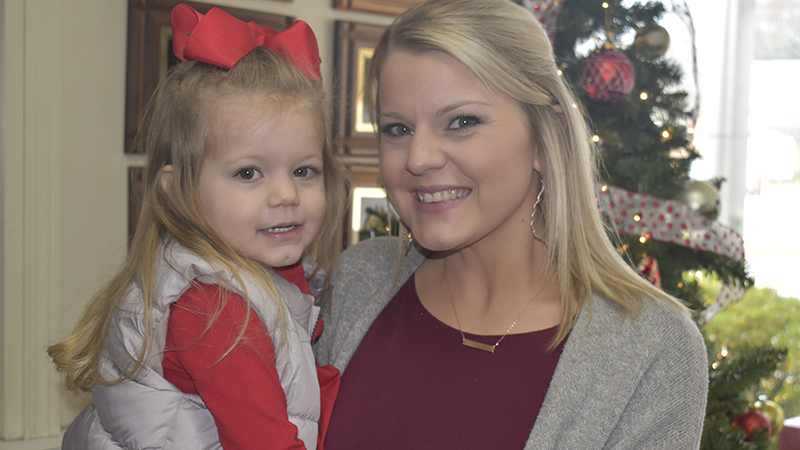 Anna Grace Wheelus was barely two-years-old when she was both diagnosed with neuroblastoma and Opsoclonus-myoclonus syndrome and declared free of both diseases in October 2016.

Opsoclonus-myoclonus syndrome affects the nervous system and neuroblastoma is a cancer that develops from immature nerve cells.

Allyson said she first became aware of her daughter’s illness when she could barely walk.

“One day we noticed that she was stumbling around,” Allyson said. “We didn’t think much of it. We thought she was trying to get attention because she wanted to be held all the time.”

Allyson said it wasn’t long after that her daughter wasn’t able to do anything.

“When she would talk, her voice would shake because of the OMS. I was thinking it would never go away,” she said.

After being checked by multiple doctors, Anna Grace was diagnosed with OMS and later neuroblastoma.

“They did another MRI, and they accidentally found a mass on her left kidney. That’s when we knew it was neuroblastoma and the reason she couldn’t walk was the OMS, which is really rare,” Allyson said. “It’s like one in two million kids get it with neuroblastoma.”

Anna Grace was 23 months old when she was diagnosed with both diseases.

“[The doctors] came in and told us it was small, so we were thinking grape-sized or like a pea,” said Kim Fuller, Anna Grace’s grandmother. “When the surgeon came in she said ‘oh its small. It’s the size of a tangerine.’”

Allyson said it was a scary time as a mother to hear both diagnoses.

Kim said their community helped come together to support them.

“I felt like I had been hit in the gut. I felt someone had just knocked the wind out of me. I knew God could handle it,” Kim said. “Our church family was great. I mean, we’re firm believers in God healing. We had taken her down and our pastor anointed her and laid hands and prayed. Lots and lots of prayers everywhere.”

After doctors removed the mass, Allyson and Kim were told it would be six months before she could move.

“Whenever they did the surgery and everything, they put her on a steroid, and they said not to expect much of a change for like six months because the OMS was going to have to go away,” Allyson said. “Within a week, she was walking again.”

Kim said even the doctors were surprised by Anna Grace’s sudden recovery.

“They gave her treatments on Sunday, Monday, Tuesday,” Kim said. “She was walking by Friday.”

Anna Grace now gets scans every six months, but Allyson said her daughter is in the clear.

“She loves being outside. She loves playing with her cousins,” Allyson said. “She’s into everything. You take one thing away from her, she’ll have another thing. I would take that any day over going through that again.”

Allyson said they definitely appreciate her recovery around the holidays, even though they don’t have much planned for Christmas.