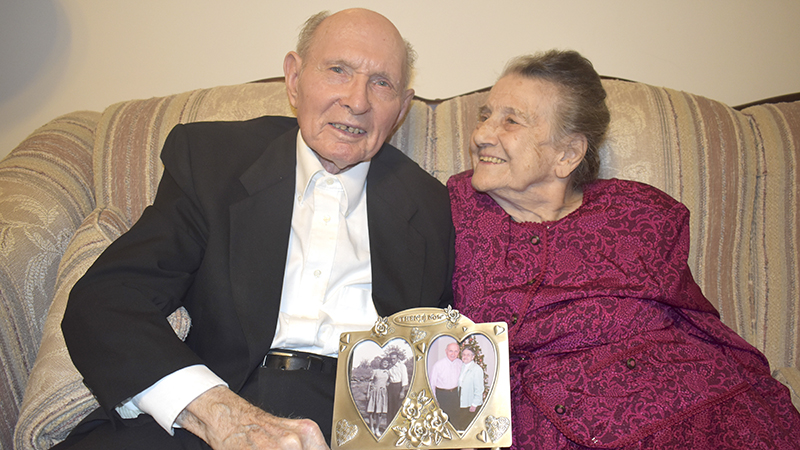 Wallace Pittman Jr. and Kathryn Pittman were married on Christmas Day in 1941. Wallace was about to be drafted into the military during World War II, and the couple wanted to get married beforehand. Monday they celebrate 76 years together. (Gabrielle Jansen | LaGrange Daily News)

While most will celebrate Dec. 25 as Christmas this year in Troup County, Kathryn and Wallace Pittman Jr. will also be celebrating their 76th wedding anniversary on that day. The two were married in 1941 at their preacher’s home because they wanted to tie the knot before Wallace went off to war.

Bonnie Pate, their daughter, said the two met in LaGrange when Kathryn was 17 and Wallace was 19. Kathryn happened to be leaving from Kress 5 and 10 Cent Store when they met.

“One night daddy and his friend was going to meet his girl and mother came out and he saw her. He asked his friend who that was because he wanted to meet her,” Pate said. “Daddy said she stuck her nose up and strutted down the street.”

Wallace and his friend caught up with Kathryn a few blocks from her home. He then talked her into going on a date.

For a while, the two kept their relationship a secret because Kathryn’s father disapproved, Wallace said.

“I soon got tired of dodging him and I told Kitty [Kathryn] if she did not talk to him about us dating, I would. She talked to him and he agreed to let me come once a week,” Wallace wrote in a letter on how the couple met. “After he got to know me, I could come anytime I wanted to.”

Because Wallace was going to get drafted, the two married at preacher Albert Ferguson’s home. They were 18 and 20 when they got married.

“They didn’t have anything, even flowers,” Pate said.

Kathryn followed Wallace around the country while he trained with the U.S. Army Airforce. He flew B-17 tail bombers in Europe.

Kathryn gave birth to Bonnie while Wallace was overseas in 1943.

“He was in service, but he would come home on a furlough,” Kathryn said.

Bonnie was six months old when Wallace saw her for the first time. The couple had two more kids after Bonnie — Frazier and Janice.

During their life together, Wallace would do accounting and Kathryn would help him.

“She checked his figures all the time, and he would get them all figured and instead of typing them, she would write it in,” Pate said. “She had really good handwriting.”

Wallace said the key to a long, happy relationship is simply to love one another.

“One of the things that I learned from these two was that when I got out and got married, I had learned that the most important thing is for a child to know that mommy and daddy love each other,” Pate said. “It gives them a stability they didn’t have from anything else, and I tried to do that with mine.”

With an anniversary on Christmas, Pate said her parents didn’t celebrate as much when she and her siblings were growing up.

Their family has celebrated twice for their 50th and 70th anniversary at Bellevue, Pate said.

“We’ve had two big parties for them since they didn’t have a real wedding. It was nice,” Pate said. “So, when I did [a three tier] cake for them on their 50th, I put real yellow roses on the cake.”

Now 94 and 96, Kathryn said she and Wallace have lived a long time together.