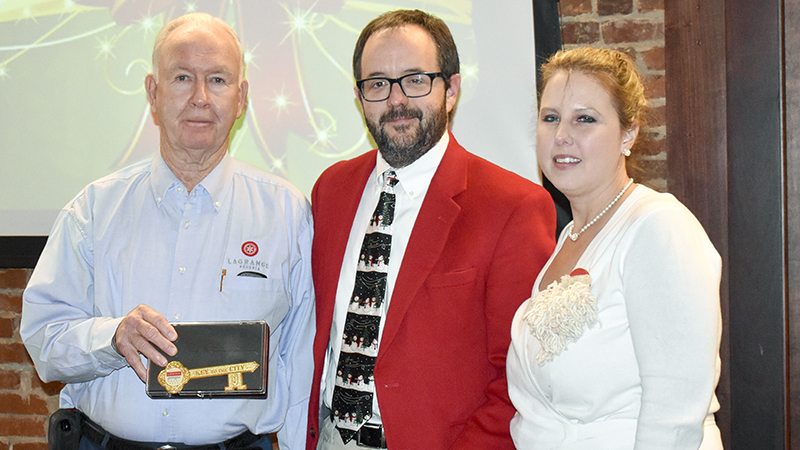 Council member Nick Woodson, Mayor Jim Thornton and City Mangaer Meg Kelsey pose for a photo after Woodson is awarded with the key to the city. (Alicia B. Hill | LaGrange Daily News)

Last week, senior Council member Nick Woodson voted in his last meeting on the LaGrange City Council after 20 years of service to the city.

Woodson has served on the council under two mayors and with two city managers, in addition to the other council members who have served with him. His experience has been invaluable to the council, especially in recent years.

“It’s been very important to have the institutional knowledge that Nick brings to the council,” Mayor Jim Thornton said. “He inevitably when I propose something, he can say, ‘Well, we tried that before, and it didn’t work.’ I think it’s valuable to have that historical knowledge of 20 years of service.”

Woodson was making a difference on the council even while he was establishing that experience though, with his careful review of city documents, frequent conversations with city staff and regular interaction with his constituents.

“Nick was probably the most thorough council member that I’ve ever served with,” said Bobby Traylor, former city council member. “Each month, the council is given a list of all checks over $2,000. Nick scanned them all, and if he didn’t know what it was, he’d go to city hall, and ask [City Manager] Tom (Hall), ‘what was this for?’ Pretty soon, he didn’t have to go because he knew where all the $2,000 checks were going.”

One of Woodson’s greatest accomplishments also came early in his service on the city council: abolishing the city property tax.

“Well, that has affected the most people I would say is when we proposed to do away with the property tax,” Woodson said. “That is definitely it. There have been a lot of decisions since then, but that was one of the first votes I ever took in my first meeting.”

According to Woodson, the idea of getting rid of the city property tax was former Mayor Jeff Lukken’s idea, but he is glad to have been part of saving the citizens of LaGrange so much money over the last two decades. He plans to continue to interact with those same citizens after he retires from the council.

“I’ll still be with the chamber,” Woodson said. “I’m a diplomat with the chamber, and I enjoy that. … You are still meeting a lot of people, and I like to meet new people. You’ll get some old ones and some new ones, so I’ve enjoyed that a lot.”

Jim Arrington will take Woodson’s seat in January, but Woodson’s legacy will live on on the council for years to come and with those who served with him.

“He has really helped me a lot to be the council member that I am,” City Council member Willie Edmondson said. “He keeps you on your toes. He keeps you listening, wondering, and Nick is a good listener. He can hear what is really being said, and he’ll tell you, ‘Willie, you know they mean this right here.’”

Ultimately though, Woodson was just thankful for the opportunity to serve LaGrange on the city council.

The two new LaGrange City Council members, Jim Arrington and Nathan Gaskin will participate in their first meeting as council members on Jan. 9 at 5:30 p.m. at 208 Ridley Avenue. Woodson and Norma Tucker, another retiring council member, are both expected to attend.