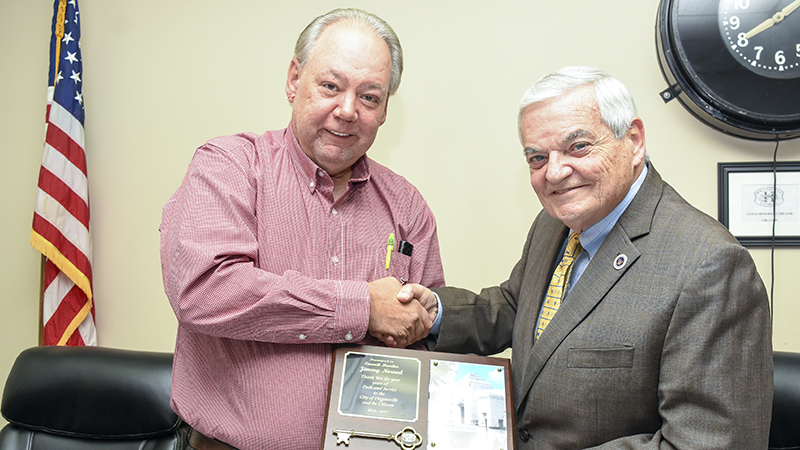 Norred, who has lived in Hogansville for 18 years, served on the Hogansville City Council for four years and decided not to run for re-election.

Marichal Price will take his place on the council starting in 2018. Norred wished Price good luck moving forward and warned him that he’s about to be extremely busy.

“You are fixing to get an onslaught of information and calls and people wanting your ear and your time than you’ve ever thought possible, so just get ready,” Norred said. “I know you can handle it.”

Norred spent several minutes thanking people on the city staff for the work they do behind the scenes.

“We’ve got a lot dedicated people who work for us, and we ought to feel fortunate,” he said.

He also asked the council to work against misperceptions in the community. The cost of utility rates were a debated topic throughout election season and still remain a talking point in Hogansville.

“One thing I haven’t done enough of as a council member, that I hope this council will do moving forward, is work on a little thing called perception,” he said. “The biggest misperception about this city is utility rates, and I wish we would take more time to communicate more with the citizens about utility rates because that’s been a thorn in the side of Hogansville for a long time, and it shouldn’t be that way because utility rates are not the whole problem.”

Norred’s final words reflected back on advice he was given when he first took office. A former council member, who he didn’t name, told him that he’d never make everyone happy, but if he did what he thought was right, that he’d have no problem sleeping at night.

“After taking those words into consideration, there has not been a night in the last four years that I haven’t been able to sleep well, so God bless you all, Merry Christmas and Roll Tide,” Norred said.