Year in Review: Looking back at the first four months of an incredible 2017 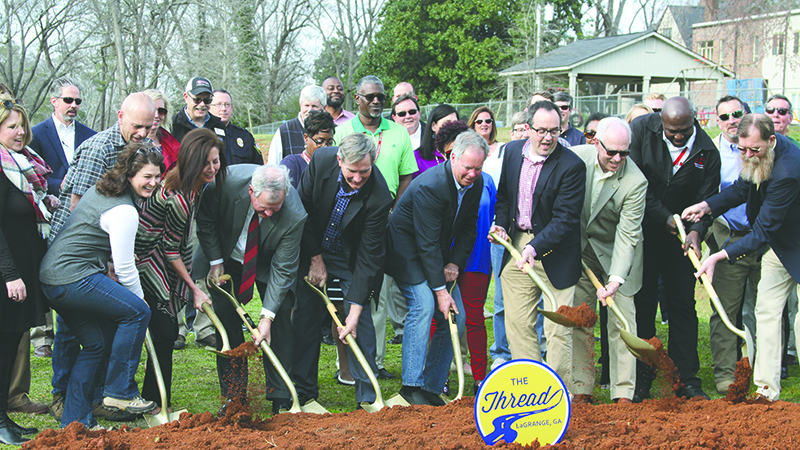 The Friends of the Thread join with local officials and community members in the ceremonial groundbreaking of the Thread Trail. --File Photo

EDITOR’S NOTE: This is the first in a three-part series looking back at the year 2017 in Troup County.

Drew Ferguson was sworn in as Congressman of the third district of Georgia, which includes Troup County and West Point, where he served as mayor. Ferguson was elected to Congress in Nov. 2016, when he defeated Angela Pendley.

“I’m excited for the work ahead and honored to be going to Washington, D.C. to serve the people,” Ferguson said when he was sworn in. “I’m optimistic for the district, for Georgia and for the nation. America has a lot of work to do. People expect Congress to start getting it right. I believe we will.”

A Troup County Sheriff’s deputy was injured in a seven-hour standoff on Jackson Street near West Point. The deputy, Matthew Hockett, was shot when he responded to a welfare check call for 28-year-old Matthew Edmondson. Hockett was grazed by a bullet and was taken to WellStar West Georgia Medical Center and released that day.

“I am thankful and blessed,” the deputy said in a follow-up story a few day later. “I know the good Lord was with me. I was just praying I would have a chance to get home and see my family.”

LaGrange Mall owner Jim Hull announced that Hobby Lobby and Dunham’s Sports would open at the mall later in 2017. Work was already underway on both facilities..

“We have already completed the first stage of this with the Aspen Dental that we just built outside and the soon to be coming Firehouse Subs, and today we are going to announce that we have leases signed and will begin construction on a 55,000 square foot facility for Hobby Lobby, and a 52,000 square foot facility that will be occupied by Dunham’s Sports,” Hull said.

Dunham’s opened in the fall and Hobby Lobby is expected to open Jan. 1, 2018.

“We were on the National Mall, so we were right there in the midst of it,” said Michelle Ashmore, the AP government and economics teacher at Troup.

The trip also included stops in Boston and New York City before going to Washington D.C. All of the students were sophomores or seniors.

Kathy Thomas, a U.S. Army veteran and Valley, Alabama native, announced that she and her husband, Michael, would open a new brewery in West Point named Chattabrewchee Southern Brewhouse.

Lewis had not attended President Donald Trump’s inauguration, so his appearance drew some criticism from alumni. However, no protestors were seen at the event.

LaGrange Police Chief Lou Dekmar, Mayor Jim Thornton, LaGrange College President Dan McAlexander and Troup County State Court Judge Jeannette Little acknowledged and apologized for the for the incidents leading to 18-year-old Austin Callaway’s death. Callaway, an African American teen, was arrested by LaGrange police on Sept. 7, 1940, for allegedly assaulting a white woman. After his arrest, he was jailed in the basement of City Hall.

Later that night, a mob of armed, white men removed the teen from his cell, drove him to Liberty Hill Road, shot him several times and left him to die, according to Troup County NAACP, Dekmar and Troup Together. No investigation was ever conducted into the death. In January at Warren Temple United Methodist Church, in front of a packed house, Thornton, Dekmar and others formally apologized for what happened 76 years ago.

“Let me say this emphatically: justice failed Austin Callaway in 1940,” said LaGrange Mayor Jim Thornton. “… Tonight is not just about a place, but another time – 1940. The threat in the 1940s is still a threat to us today … and until we have a full, complete acknowledgement of the past, we can never fully heal.”

A 44-year-old man died after allegedly shooting his daughter in the chest on Hines Road. James Thompson was allegedly combative when law enforcement tried to take him into custody, and he was tased. He became unresponsive and died at the scene, according to authorities. His daughter, 24-year-old Kiley Thompson, was shot at least once in the chest and was airlifted to Atlanta for treatment. She was in stable condition a few days after the shooting.

Nationwide search for suspect on shooting

A nationwide search for William Boyette and accomplice Mary Rice ended in a three and a half hour standoff with law enforcement officers at the West Point Motel.

Rice surrendered to authorities, but Boyett shot himself, according to authorities. The couple was involved in a home invasion in Florida and the stolen car they were driving — a white Chevy Cobalt — was discovered in the motel parking lot.

William Boyette allegedly killed three people and shot a fourth person in a spree that had been going on since Jan. 31. One of the women killed was Peggy Phillips Broz, who grew up in Lanett, Alabama.

The inaugural Mardi Gras parade was held in downtown LaGrange. Many dressed up in Mardi Gras’ attire and floats were brightly decorated in traditional purple, gold and green.

A 7-month old infant and a 2-year-old child were put in the care of the Department of Family and Child Services after law enforcement officers found them living inside a camper in Hogansville filled with junk, trash and feces.

The room where the children was found was attached to a bathroom, where four other residents were allegedly using a five-gallon bucket as a toilet. Conditions inside the home were described as ‘deplorable and completely unsafe for habitation,’ said Chief Brian Harr with the Hogansville Police Department.

Water had been turned off at the home at the resident’s request due to a possible water leak, Harr said. Trash was so high at some points that it went up to the shins of officers on the property. Thirty-one animals were also seized from the property.

County computers back online after hack

County employees, law enforcement and computer insurance specialists worked for nearly a week to get computers that were hacked back online.

“All assurances that we have gotten from the insurance, from law enforcement, from IT is that no personal information was attained,” said County Commission Chairman Patrick Crews.

The county did not have an estimate of the labor cost of the hack to the county, but many county employees could not access information needed to do their jobs while the computers were fixed.

Man in stable condition after being shot in chest