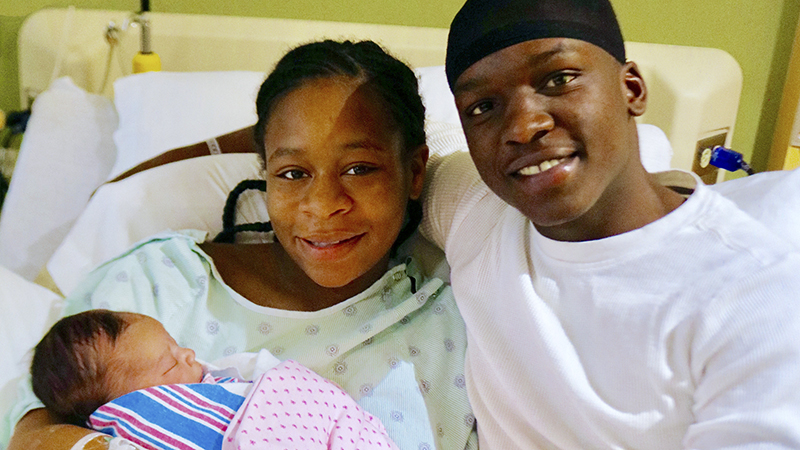 Labor and Delivery nurses at WellStar West Georgia Medical Center expected to welcome Troup County’s first baby of the New Year on the first day of 2018. After all, the last week of December had been particularly busy, as they helped care for six babies born on Thursday, seven on Friday, five on Saturday and three on Sunday.

It seems those two character traits are evident in both her parents, who moved to LaGrange in November of last year. Golden was in good spirits after enduring 26 hours of labor. Carter stayed by her side the whole time, and he didn’t even catch a wink of sleep because he felt it was important to be awake in case she needed him.

As the first baby of the New Year, Lailah received a gift basket filled with a teddy bear, children’s books, a blanket and other goodies from the Maternal/Infant Services team members at WGMC.

Each gift was special in its own way, but another one in particular was completely unexpected by the family, and its backstory is as touching as the hope and renewal that Lailah symbolizes as the community’s first new life in the New Year.

As two of her uncles celebrated with Lailah and her parents in their hospital room Wednesday, hospital team members had arranged for them to have a special visitor, Tommy Griggs.

Four years ago, Tommy and his wife, Venessa, were anxiously awaiting the birth of their new grandson, Camden Sands, at WellStar WGMC. The son of Adrienne and Justin Sands, Camden was the first baby born at WGMC in 2014 when he arrived on Jan. 2.

“Camden turned 4 on the same day your daughter was born,” Griggs said Wednesday afternoon. “My daughter and her husband had already been through so much to have a baby, and for him to be the first baby of the year in 2014 made the day even more joyous for us than it already was.”

Adrienne and Justin had been trying to have children and lost their first son, Alexander, to a miscarriage, Griggs said.

“My wife and I were there as Adrienne and her husband experienced heartache, and when they experienced celebration, and we know how necessary it is for first-time parents to feel loved and supported, not just emotionally but with practical things that will make their lives easier,” Griggs said. “The hospital staff did so much for my daughter and her family, and the Lord impressed it upon us to pay it forward and do something for each year’s first baby and parents and be a blessing to them. I think it’s important for people not just to say they want to help others. We all need to take action and just do something.”

Griggs gave the new parents a card with a special gift inside to commemorate their new pink bundle of joy, just as he has for every first baby of the year since Camden was born.

“I know you don’t know me, but I really feel called to be here and share something with you,” he told Golden and Carter. “Four years ago, my grandson …”

His words flowed, and each was crafted humbly and carefully to Lailah’s parents: “You have been entrusted with the most wonderful yet the hardest job there is. Don’t be afraid to ask for help from your family surrounding you today. Remember that she will look up to you, so be the best person you can be. She is a gift from the Lord. Her body and her soul and her heart are all fragile. Do everything in your power not to hurt her or let others hurt her. Be a blessing, not only to each other and to her, but to other people as well.

In addition, WGMC’s “First Steps” program Coordinator Norma Tucker presented the family with a handmade knitted purple cap as part of a nationwide awareness campaign to prepare new parents for the “Period of PURPLE Crying,” a phrase developed by the National Center on Shaken Baby Syndrome to describe the phase from about two weeks to five months of age when most babies cry and often can’t be consoled.

Community volunteers knit the caps for the First Steps program, and Tucker tries to be sure every family of a newborn at WGMC receives one. About 1,000 babies are born at the hospital each year.

“We hope the caps will remind all new parents not to harm or shake their baby and that they’re not bad parents just because they are feeling like they can’t meet their baby’s needs,” Tucker said. “We also hope the caps remind them, we’re only a phone call away if they need help.”