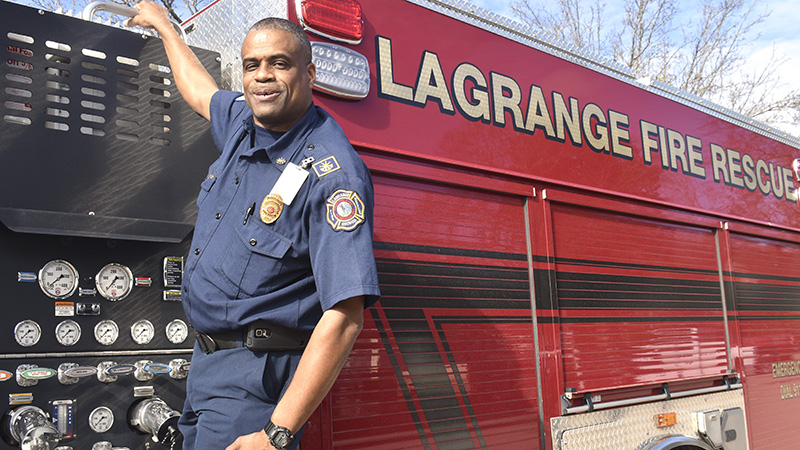 Come July 29 this year, Deputy Chief Willie Bradfield will have been working at the LaGrange Fire Department for 19 years, but that’s not counting the previous years he’s served with the Heard County Fire Department.

“When I got on with [Heard County Fire Department], I actually came down here to LaGrange for rookie school,” Bradfield said. “So, when I came down (to work) here, they were like, ‘well you have to go through our rookie school for us,’ so I had to go back to a second rookie school.”

“Once I started volunteering, I got into helping people, and I [saw] the training they were doing and thought ‘man, I would like to get into that,’” he said.

“After that I kind of hung around the fire department the kind of seeing what they were doing for about four or five years and then I applied with Heard County in 1997.”

At LaGrange, Bradfield has worked his way up through the ranks, making sergeant in 2005, lieutenant in 2007, captain in 2010 and deputy chief in 2013. He has held all of these positions while also serving at Heard’s fire department as lieutenant and captain.

“I’ve worked in both departments for 15 years,” Bradfield said. “So, when I got lieutenant here, we have more duties. We have to go to staff meetings and stuff like that, so I just dropped down from captain [in Heard] and just walked back to the firefighter stage.”

He has worked part-time with the other department since 2014.

Deputy chief Robert Taylor retired in December. Bradfield said when another member of the department gets promoted as deputy chief, he’ll oversee shifts.

The Franklin native said one of his favorite things about working for the local fire department is the City of LaGrange.

“This is a good department. This is a good city to work in and just out helping the public and representing LaGrange Fire Department in the community,” Bradfield said. “We get seen a lot in the public, so a lot of people see and they just always love to see firemen.”

Bradfield said he also appreciates the relationship he has with his coworkers.

“I guess one of my favorite memories is once I completed the rookie school, I realized then I was part of a family. A part of really great bunch of guys who cared about each other who would go out and do anything for each other,” he said. “Just knowing that I was [meant] to be in the community helping those who need help in their time of need. I do love teaching here. I do love doing rookie school, being able to go out there and helping instruct and participate with guys. It’s just a good department to work at.”

Outside of work, Bradfield said he enjoys spending time with his wife, Alane, and children, C.J., Lane, Khila, Alexis and Allena. He is also restoring his 1979 Pontiac Trans Am.

Bradfield said his favorite thing about LaGrange is that it’s growing.

“A lot of towns, if they don’t grow, they seem to get small and nothing comes and nothing is ever happening,” he said. “So now its growing and bringing more revenue into the city so it kind of picks up.”