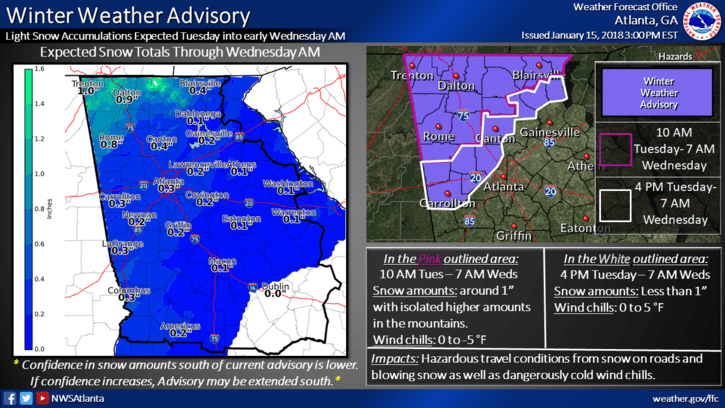 Single digit wind chills and temperatures in the low teens are forecasted for Troup County on Tuesday night and Wednesday morning. Snow flurries are also possible.

Carly Kovacik, a forecaster for the National Weather Service in Peachtree City, said the wind chill for early Wednesday morning will be around 5 degrees.

“As far as low temperatures, overnight Tuesday and Wednesday, [LaGrange is] looking at lows in the teens, but it’s going to be the wind chill that we’re concerned about,” Kovacik said. “As of right now, checking wind chills on Wednesday, are going to be in the single digits around 5 degrees and that looks light the coldest morning right now as of wind chill.  The wind is going to be blowing noticeably Tuesday night into Wednesday morning.”

When temperatures are in the single digits, pipes could freeze. Alex Beall, director of Jackson Heating and Air’s plumbing division said to prevent pipes from freezing by covering up exterior vents.

“The biggest thing that we recommend to people are to cover up any exterior hoses, vents or spigots with something from the hardware store, or if they don’t have that, just simply wrap a tile around it, can help prevent those from freezing,” Beall said. “If there’s a crawl space, make sure any large cracks or vents or opening that will allow air to get under the house, make sure those are closed off to prevent airflow from under the house. If they have a well house, to have some type of small heater or even just a lightbulb in the well house because it can help those pipes from freezing.”

Homeowners can turn off water if their pipes freeze.

“If their pipes freeze, it can be a good idea if they recognize they have frozen pipes to turn the water off to the house,” Beall said. “The pipes can freeze and burst and stay frozen and won’t start leaking until they thaw out.”

The northwest portion of the state is under a winter weather advisory. As of 4 p.m. Monday, Troup County was not a part of that advisory.

“Up north across the mountains is where we’re seeing the coldest wind chills right now, and so we’ve got a wind chill advisory and a winter weather advisory north of [LaGrange],” Kovacik said. “We’ll monitor trends to see if we need to extend that further south over the next 12 hours or so, but as of right now, you guys are not in any kind of advisory right now.”

The latest forecasts from the National Weather Service in Peachtree City estimate LaGrange could see up to 0.3 inches of snow Tuesday night.

“(It’s) currently looking pretty light. As far as accumulations for that area, looking at maybe a dusting to one or two tenths of an inch,” Kovacik said.

If school is canceled, students will be notified when the decision is made, Stephen said.

“We’ll make sure to notify the public via One Call Now, which is the robocall you usually hear. We’ll also post on our Facebook page and website, and we’re very conscientious of individuals having to go to work and prepare for their kids to be taken care of,” Stephen said. “So as soon as we know, we’ll put the word out there. We’re just waiting to see like everyone else.”