Up to 1 inch of snow possible in Troup County 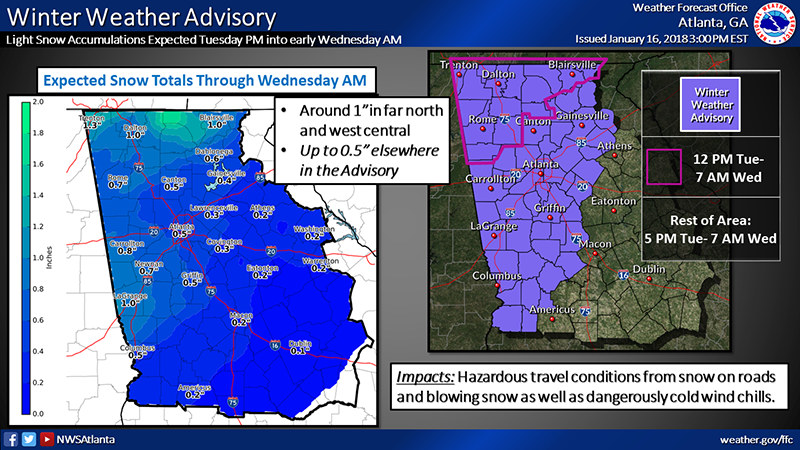 The forecast for Troup County has been updated and up to an inch of snow is now possible Tuesday night into Wednesday morning.

The snow could start falling as early at 9 p.m. Tuesday night, according to Matt Sena, meteorologist with the National Weather Service in Peachtree City.

Sena said the snow will continue to fall until around 5 a.m. Wednesday morning and will cause slick conditions.

“Temperatures will be dropping significantly overnight. It’s fairly warm and comfortable today for a January day with a lot of sunshine this morning, when the front comes through this evening, temperatures start falling fast, so it’s a little deceptive on the weather during the day today [compared to] what’s coming overnight,” Sena said. “That would be when [Troup County’s] chances for the best snow would be, maybe starting as early as 9 p.m. or 10 p.m. this evening with some light flurries.”

The heaviest snow would be likely to fall between midnight and 5 a.m., Sena said. The snow is likely to stick at that time too because the ground will be much cooler, Sena said.

“Temperatures will fall pretty quickly. The biggest thing now is that some of it may melt at the beginning as the ground is still cooling off from a fairly warm day and a lot of sun from this morning. But temperatures drop really fast, so [Troup County] will get some that sticks,” he said. “The question is going to be do you get a little bit of extra from the possibility of a little bit of a surge overnight across central Georgia? That may push you up to around an inch, which [is why] it’s going to be a little dicey tomorrow morning.”

Sena said Wednesday morning’s temperatures will be in the teens, but the wind chill in the morning will make it feel like the single digits.

Roads are expected to be slick and people should drive carefully if they have to be out, Sena said.

“Folks need to be very careful tomorrow morning and pretty much through the day because we’re not really expecting to get above freezing across that area, so not a whole lot of help during the day until we get some sunshine which may be by afternoon,” Sena said. “But if you don’t have to be out and about tomorrow morning, it’s probably a good idea not to be (out) until we see exactly how much we get and what conditions it leaves our roads in.”