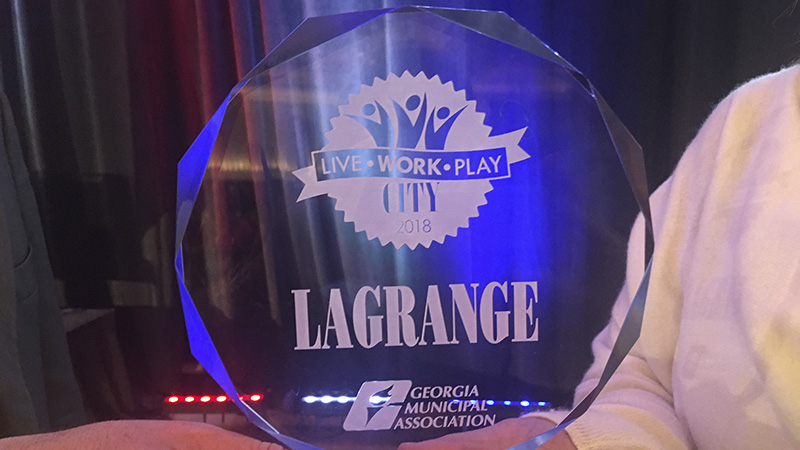 The City of LaGrange was named a live, work, play city by the Georgia Municipal Association during its annual Mayor’s Day conference Sunday.

LaGrange was one of three cities, including Athens-Clarke County and Columbus, were given the award in the large city category.

LaGrange was categorized as a large city because its population size of more than 25,000 residents.

“We obviously had to compete with some cities that were much larger and had significantly more resources, but I think that LaGrange shows very well,” Mayor Jim Thornton said. “There are 530 cities in Georgia, and they’re very diverse all in terms of size and so forth, but I think that LaGrange is a great place to live. It’s really nice to actually have a competition where our city can be compared to other cities of similar size, or in this case even larger size, and for our city to be held up to an objective standard if you will, and for people to say that ‘yes, LaGrange is in fact a great place to live.’ That’s not to say that there’s areas for improvement, there always are areas for improvement, but I do think that when you look at LaGrange and compare us to other cities, we really do stand out as a great town.”

According to the City of LaGrange Communications Director, Katie Mercer Van Schoor, the city submitted a video about the city along with an application to the association in October.

LaGrange will be featured along with other winning cities in the February issue of Georgia Trend and highlighted in the GMA’s monthly newspaper, Georgia’s Cities, according to a press release.

“We are excited and proud that our city is recognized as a live, work, play community. This is a direct result of the hard work and planning that’s been happening here for nearly 20 years,” said LaGrange City Manager Meg Kelsey in an email.

“We’ve seen tremendous downtown revitalization, successful industrial and commercial recruitment, and an intentional push toward improving our quality of life here in LaGrange. Recognition such as this reinforces that the work everyone is doing to build an amazing community is paying off.”

This is the second year that the GMA has given the work, play, live awards, Thornton said.

“We’re always looking for ways to tell LaGrange’s story, and to share our story around the state and really around the nation. We’ll continue to look for opportunities to compete in the future,” Thornton said.

“LaGrange is great because of a lot of partnerships of citizens, businesses, non-profit organizations, as well as the city, and I think that a recognition like this is a testimony to how well we all work together to improve our community.”