Service from the Air Force to the Red Cross 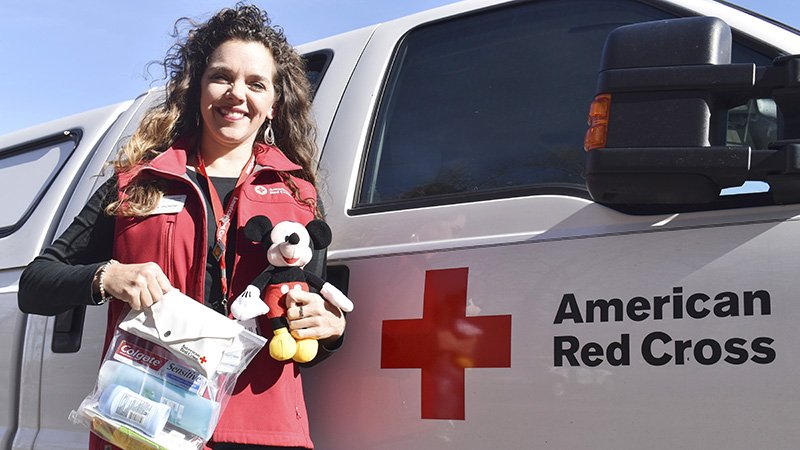 Stacy Hummer said her current role at the American Red Cross of Central Midwest Georgia, where she serves as disaster responder, shelter co-lead and leadership volunteer, is fairly similar to her past career in the U.S. Air Force.

“It’s very second nature to me to respond on the fly and get ready to go, and if there’s a call to go that’s something I’m very accustomed to doing. It’s my second nature as well,” Hummer said. “A large percentage of [our Red Cross team] are veterans of the military, so we kind of cross over and just continue to use our service, our background, and the way we’re trained in different areas to serve people.”

Hummer said she was born and raised on a dairy farm in Iowa, and it was there where she learned she wanted to help serve people.

“My stepfather was also a firefighter, so [I] grew up in an environment of always being alert and aware of other things people were going through,” she said. “In a small community of 3,000, you always know your neighbors and you’re always there to help your neighbors too. That’s another area for me and American Red Cross why I love to serve. I’m very passionate about that, so if I can find a way to do it, then I’m going to do it.”

Hummer joined the U.S. Air Force when she was 17. She served for seven years.

“I flew on a model that was called a KC-135R model, and I was a Boom Operator,” she said. “What I did was I actually refueled airplanes while we were airborne, and I hauled cargo as well. I was also responsible for all of our cargo, all of the weight and balance on the airplane and the back up to navigation to our navigator’s positions.”

The volunteer served in the back end of Operation Desert Storm and other smaller operations. Hummer’s last duty was in Grand Forks, North Dakota.

“My first experience with the Red Cross was back in 1997 in North Dakota. I was in the military, and we had a major flood in Grand Forks, North Dakota, and we actually turned our Air Force base into a Red Cross shelter operation,” she said.

“Every airplane hangar and every facility that we had on base became a shelter for our city of — I don’t remember the population at the time — but I know there was something around 70,000 people. Those who didn’t have some place to go came to our base, so we as military actually served 12 hour shifts just like you would in a shelter operation situation now.”

She left the air force as a senior airman and moved to LaGrange in 1997. She then started volunteering with the local Red Cross.

“I chose to move down here after I got out of the military in 1997 because I was tired of the cold and the snow,” she said.

She became a full volunteer in 2011 and moved to Harrisburg, Pennsylvania, before returning to LaGrange in 2014.

In her positions, Hummer mans shelters during natural disasters and responds to scenes with local fire departments by assisting families who may have lost everything in a home fire.

“We have very strong partnerships with our fire departments, so when they go to a scene, and there’s a family involved and if they find out the family does not have any place to go or any other recourses in their communities, they contact us,” Hummer said. “Then we respond to scene as well, and what we do is we give client’s basic immediate assistance, so there’s a dollar amount and those are donor dollars that come to the client based on the number of people that’s in the home and the assessment of the home, but we’ve got forms that we go by and allocations that we have to go by.”

When that kind of situation happens, the volunteers also give comfort kits to the families.

“If you’ve just lost everything in your home, we may be putting you up in a hotel, but then you need toiletry items,” she said. “We also have a partnership with Disney. We have been given Mickey Mouses’ for the children in the families because if you think about it, that’s a trauma that they’ve just been through. They lost everything, and many people don’t realize trauma affects different people different ways.”

Outside of volunteering, Hummer works for Overwatch Technology and Charity Blend. The volunteer likes spending time with her son Zach and daughter-in-law Kayla and her grandchild Brinleigh.

Hummer said her favorite thing about LaGrange is its sense of community.

“It’s growing exponentially since the 20 years that’s I came here, but I would say there’s a real sense of community here,” she said.

“There’s a lot of amazing organizations that make up beyond the great businesses in this town too, so there’s a real sense to make a difference and continuously change and help people grow and strive to become better citizens.”

Voting closes for Behind the Mask