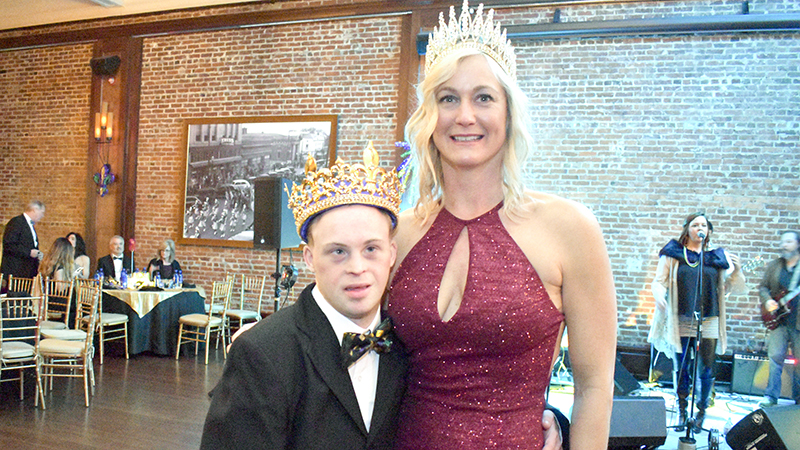 Tyler McCoy and Lucretia Silcox were crowned 2018 King and Queen of the Mask.

The 12 candidates for King and Queen of the Mask set a new record this year for Twin Cedars Youth and Family Services. According to Twin Cedars executive director Sheri Cody, the candidates raised $75,644 together. The Behind the Mask ball on Saturday raised another $34,300, bringing the total raised to more than $100,000.

“This is going to be one for the history books, this is the best year that we’ve had,” Cody said.

The sold-out ball Saturday also started a new tradition where the 12 candidates performed a dance from the film The Greatest Showman.

Candidates fundraised money through various ways, and each dollar donated was counted as a vote.

McCoy was sponsored by Dale Jackson this year. Jackson said that they planned to break his record of $14,000, which he raised as a candidate in 2016.

“Because of our support with Twin Cedars, this year, we thought there would be no better representative from Jackson Heating and Air than Tyler McCoy,” Jackson said.

“It’s a little humbling because really in the big scheme, it’s more about the children than myself wearing a crown,” Silcox said. “Either way, it’s still fun.”

Silcox said she ran for queen after a friend asked her to campaign.

“Just being able to help these children who don’t have anybody helping them and who are in such dire straits, it was motivation enough for me to buckle up and start running once I embraced those thoughts and feelings,” Silcox said. “The more I learned about Twin Cedars, the more I understood how encompassing they are as the many organizations they keep afloat.”

The money raised from the event will be divided among all of the programs run at the LaGrange location, according to Cody.

“The support of this community has been absolutely phenomenal,” she said. “It’s exciting, and we’re really happy to everybody here tonight, but it’s also really humbling to have the community support and be so generous with Twin Cedars.”