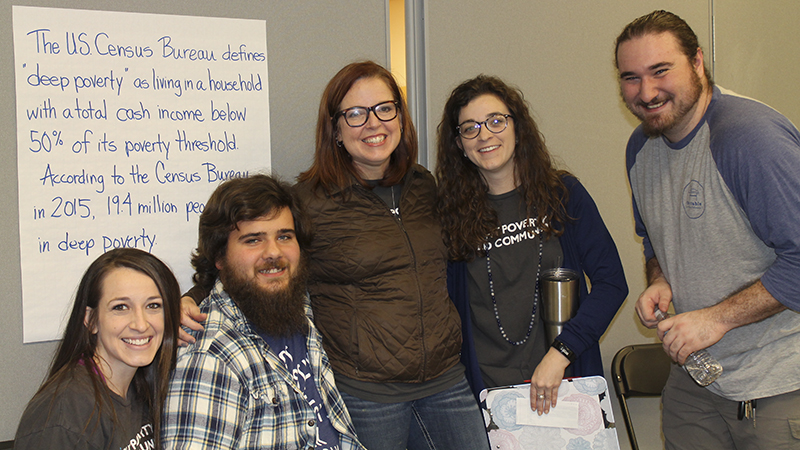 During the monthly Troup County School System (TCSS) Title I Parent Advisory Council (PAC) meeting, over 40 people gathered at the Mike Daniel Recreation Center in hopes of learning more about poverty in Troup County and how it impacts the school system. Thanks to Circles Troup County (Circles), they not only learned about poverty, but lived it during the simulation.

Circles is a long-term approach to end poverty permanently in the Troup County community. Each week, local families working to overcome poverty meet with community volunteers over dinner. During the meetings, participants work on their goals toward self-reliance.

Sherri Brown, Director of Circles, and a host of volunteers led the PAC participants and TCSS employees in a poverty simulation that included real-life scenarios of what individuals living in poverty face. Each person was given a character to play; for example, one parent played the role of a 16-year-old young adult who had to work after school and during holidays to help the family pay for the monthly groceries. Each character’s family was given a certain number of transportation passes and weekly income. Through this process, they were also informed if they were employed, had to deal with health-related illnesses, attended school, or homeless.

Before the group dispersed to live their new lives, Brown shared with them to really think about how what they are about to experience impacts children and families in our community. She said, “There are thirty-three percent of children in Troup County that live at or below the federal poverty level. There are a lot more that live in what we would consider low income homes that aren’t making it. This affects how a child may come to school or why a parent can’t make the parent-teacher conference.”

As the morning event continued, participants became more like the characters they were simulating as one family didn’t have enough bus passes to go to school or work while another family had the benefit of social capital and were given extra incentives to make it through the week.

After the simulation, Brown brought the group back together to discuss what happened, how they felt, and how can they make changes in their lives to help positively impact those living in poverty. Many of the group members said they felt angry, embarrassed, stuck, at a disadvantage, and depressed about the life their characters were given.

Sakara McCurdy is the mother of a Pre-K student at West Point Elementary. She played a 13-year-old child during the simulation. She said, “I was able to see how life could be when a family is really struggling. I’m not 13, but I felt the pain of being home alone because my parents were out trying to make ends meet. I could see the other families around me. I could see how well they were doing, and it made me feel like I was really in a situation where my family struggled to live.”

McCurdy said she tries to attend all PAC meetings, but she felt especially drawn to this particular one because of the topic. She continued, “I felt it was important to be a part of this meeting because I knew it was going to be interesting and educational. I think all parents and educators should go through this simulation because it was very eye-opening.”

Brown stated Circles volunteers put a lot of energy and resources into the simulations because it is a valuable tool to bring people like McCurdy and other parents together to start addressing issues on poverty.

Brown said, “We hope that people grasp the complexities and barriers that people experience when they are low income families. We want to start the conversation and eventually lead to solutions that help people change their lives. We need people to understand it’s not simple, it’s not easy, and it’s not fast. It takes an entire community.”

Of hosting the simulation for parents, grandparents, and TCSS employees, Brown stated, “This was a very diverse group because you have parents and educators. The value of today was bringing everyone together to focus on one common issue. They took it seriously. They really tried to see how the community is affected, their job is affected, and how people who deal with the issue of poverty are affected by the issues that were experienced today.”

To find out more information about Circles Troup County and how to get involved, visit CirclesofTroup.org or contact Sherri Brown at (706) 883-1687.

Structure fire spreads from one residence to other houses…