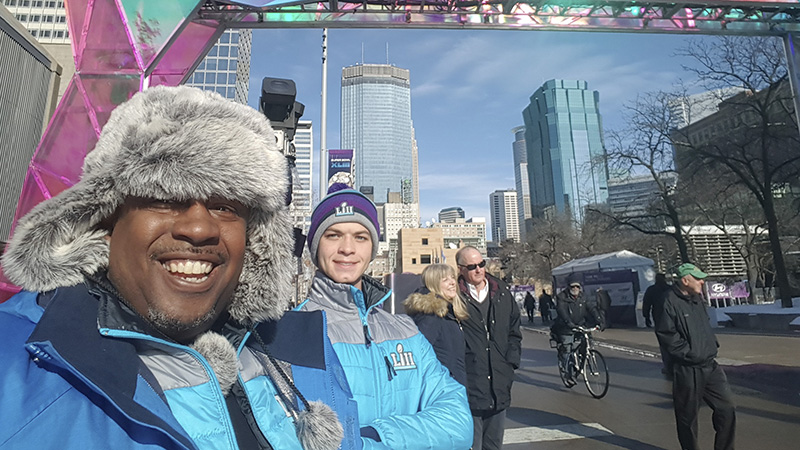 Seven LaGrange College students are living the National Football League fan dream by volunteering at the Super Bowl in Minneapolis this week as part of their sports management program. Keaton Coates, Ahmad Sims, Taylor Thrailkill, Serik Rosencrants, Lydia Subat, Nick Rawls and Zachary Kudwa have handed out uniforms to NFL employees, helping out at the NFL House this week, and they will direct fans and staff through U.S. Bank Stadium Sunday.

“Before we were working with the host committee, now we’re working directly with the NFL and the students are actually getting paid for this,” said Preston James IV, LaGrange College assistant professor of sports management and law. “That’s pretty cool.”

The house, which is a VIP facility for business partners of the league had NFL commissioner Roger Goodell, Minnesota Vikings general manager Rick Spiekman and retired football player Joe Montana among others, according to James. He said LaGrange College is the only school that is working in the NFL House.

“We’ve been working so many hours. We’ve been putting in 16 hour days,” James said. “[Wednesday] was the first night of the NFL House, and we’ve already had students who were offered internships.”

The students in the program have also worked at the Peach Bowl and College Football Playoff Championship Game in Atlanta. According to James, the students also went to the NFL and NBA offices, where they met commissioner Adam Silver, along with the Knicks and Yankees general managers in New York in December.

Students have also had the opportunities of working at Atlanta United and Atlanta Falcons home games, and at the International Ski Federation Alpine Ski World Cup in Colorado.

“All of my senior year I’ve been basically traveling around the country,” Subat said.

Subat and Thrailkill were also invited to the women’s summit after reconnecting with some other women they met at the NFL office in New York, according to Subat.

“It’s a program that 500 women from the ages of 18 to 24 who are in the sports career are invited to and have women speakers,” Subat said. “Last year they had Simone Biles speak, this year they have Deshaun Watson and a few other speakers. We we’re just blessed to get that opportunity.”

Rawls, a political science major with a minor in sports management, said it was a great experience so far, including meeting retired player Darrel Young.

“He really inspired me to go after the things I want in life and just give me reassurance,” Rawls said.

“That’s always positive hearing it from somebody from a different point from you who’s in the NFL office.”

James said he’s glad his students can apply what they’ve learned in the classroom, such as networking, with these kinds of events.

“That gives me a lot of joy,” James said. “A lot of what we do in the sports industry you can’t learn in a book, you have to learn from actually going out and doing it.”

Thrailkill,  a junior business sports management major, said the program gives students a lot of opportunities with different events they can attend.

“We’ve got an awesome program at LaGrange College,” Thrailkill said.

“It’s definitely something that kids at the high schools should check out.”

James said working at the Super Bowl has been a great opportunity for him and his students.

“That’s a really good feeling know that it’s little old LaGrange College, but we’re making a big impact in the sports industry,” James said. “Out of all the schools in the nation, out of all of these big names, even in Georgia, we’re the only school here that’s working at the NFL House.”