How Behind the Mask helps Twin Cedars 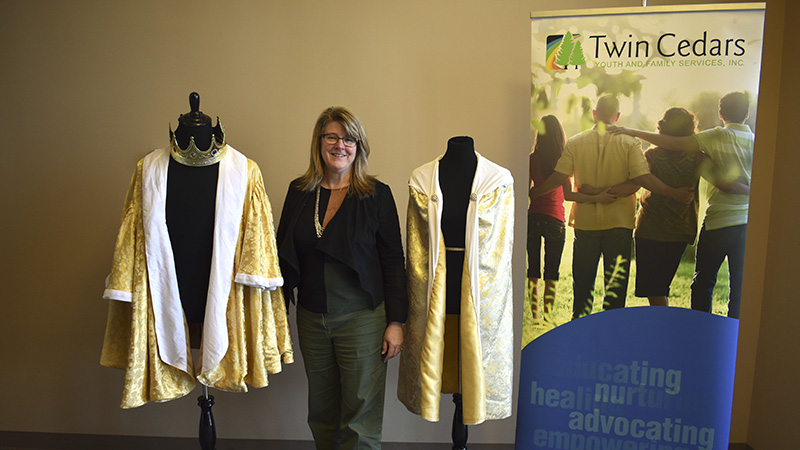 Above, Twin Cedars executive director Sheri Cody poses with the capes worn by the king and queen of Mask.

Executive director of Twin Cedars Sheri Cody said the LaGrange location raised between $113,000 and $115,000 from this year’s Behind the Mask. This included funds raised by the 12 king and queen candidates’ fundraisers and the program’s sponsors.

The youth and family services uses the money raised to give to each of their programs based off of need and how involved the directors in helping Behind the Mask. Cody mentioned the Safe Families for Children funding, whose financial year runs from July to June.

“The Safe Families program had a grant to fund their program that ran out in December, so that means it ran out halfway through their year,” Cody said. “So, [the program director] had no funding for the second half of the year… so 56 children were able to be placed with a family last year because Behind the Mask money helped keep that program active during that six-month period when they had no other funding.”

Candidates can request that the money they raise for Behind the Mask can go to a certain program and it will be fulfilled.

“There is no formula, but there are three ways the money is normally distributed,” Cody said. “If there’s a candidate who says ‘whatever I raise, I would like to go [to this program], then we would comply with that request. That would be one way. The second way is we look at the needs of each program in terms of financial needs. The third way would be all programs staff representatives involved in the planning and execution of Behind the Mask each year. There is weight on the extent to which you help behind the Mask.”

Cody said the state of Georgia reimburses them about 85 percent of what it costs to take care of a child for a day.

“Behind the Mask helps us to make up the difference between what it costs to take care of a foster child and what we actually get,” she said. “That could mean lots of different things in terms of what we do with that money.”

Money goes to the Bradfield Center, which has a capacity of 45 boys between the ages of 12 and 17, Cody said. The center is for boys who have been abused and experienced complex trauma, and have been moved from homes between four and 30 times.

Part of the center holds Ault Academy for the boys to attend to catch up on education.

“When you have children who have been living in chaos and you have children who’ve moved around a lot, their education is impacted,” Cody said. “That kind of volatility causes a lot of problems trying to keep with school and knowing what your homework is and even thinking about going to school when your family is in chaos.”

The money helps with the Ault Academy summer enrichment program, which is not state funded. The program has taught boys robotics and aquaponics and chemistry. This year they will do horticulture and nutrition, Cody said.

The money helps fund their Thanksgiving feast and Christmas dinner, and can even be used to buy the boys suitcases.

“Foster children often show up with a black plastic garbage bag with whatever their belongings are inside,” Cody said.

It can help with insurance for children and mental health counseling.

The most visible signs of the money being used is by the children fitting in with society, Cody said. The money raised helps the children internally, such as the Connections program that starts to bring boys back into the community.

“Their hair is going to be cut, they’re going to have school clothes that look similar to other people. They’re going to be involved in extracurricular activities and go to ball games and work in the community. So, the funding that’s providing, not only helps children heal, but helps them to thrive and feel a part of the community instead of feeling less than or feeling unwanted like they have for a long time.”

The funding has also gone on to help replace a 15-passenger bus for the boys to an eight-passenger van so they don’t feel like they stick out when traveling to places such as school, Cody said.

Even though there are multiple Twin Cedars locations in Alabama and Georgia, all money raised at the event goes directly to the LaGrange location. Columbus and Macon have fundraiser dinners.

“It doesn’t go into an overall Twin Cedars budget, it goes into each of the LaGrange program’s budgets,” Cody said.

“It is by far the best supported and most successful fundraiser that Twin Cedars does, and it’s in the smallest community. I think that says a lot about LaGrange. It also says it’s a really fun event.”