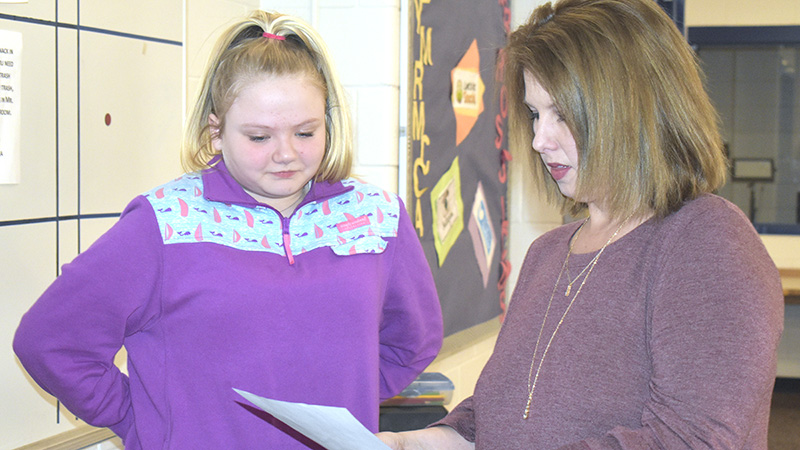 Madilyn Bishop talks with City Manager Meg Kelsey about a proposal for more electric car chargers to be placed around the city. --Gabrielle Jansen

The class is studying how technology has changed the world and came to the evolution of vehicles including hybrids and electric cars, according to engineering teacher Chris McCalla. Students last week started looking at charging stations for electric cars in the city.

“I said ‘you know what we’re going to do? I just got the idea, let’s make a presentation and invite the city manager,’” McCalla said. “We want to see more charging stations, and we like to think we can help out with that. We have some pretty good ideas for the city.”

The students proposed about 20 to 25 charging stations around the city, including at Great Wolf Lodge and other commercial industries. McCalla said students did most of the work themselves.

“All I did was basically format the PowerPoints a little bit, but all the language, the designs they did on their own, and it really shows that kids have really great ideas,” McCalla said. “You look at how things have changed so fast with technology, and those (charging stations) probably came from college students and those who had ideas. These guys are going to be the one changing a lot of stuff in the next 20 or 30 years. [I think] it’s really cool to do on their own and really think outside the box on a lot of these.”

Kelsey said the students are learning a lot of skills from doing projects like the proposal.

“I didn’t have the opportunity to be in a class like this to think outside the box, and I thinks that’s just so impactful that [they] get this opportunity to start learning things and actually expressing [their] ideas at a much earlier age than certainly my generation was able to do,” Kelsey said.

“That’s really cool. I think it engages [them] as young people to make education fun because sometimes [they] go to school, and [they] kind of dread having to get up and go to math and have to read a book or whatever, but then [they] get to go to a fun class and [they] get to express [themselves]. But [they’re] also learning.”

Kelsey said she would show the proposal to Mayor Jim Thornton at least by the end of the week.

McCalla said his students are creative because they have been growing up surrounded by advanced technology.

“We’ve studied a lot about (Leonardo) da Vinci, space travel, innovations there and just a lot of tech heavy stuff topics, and it’s amazing what they come up with because my generation we barley had computers,” he said.

EMT inspired after assisting in accident