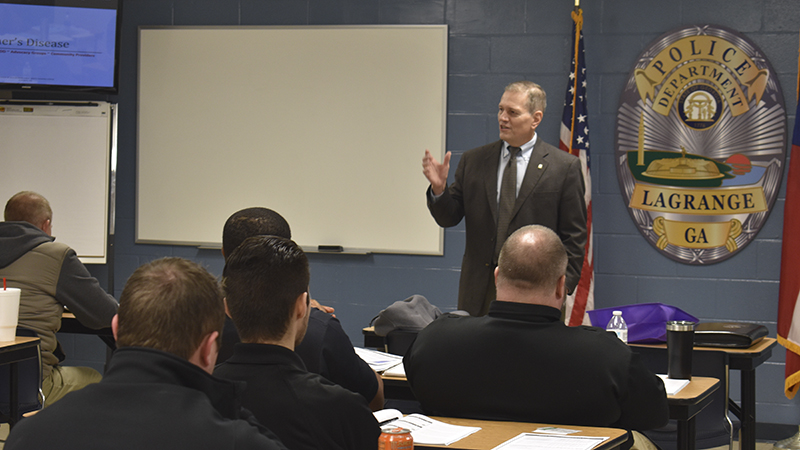 The LaGrange Police Department is holding Critical Intervention Team training this week for new officers to learn how to interact with citizens with mental illnesses.

LaGrange Police Lt. Eric Lohr said the class teaches de-escalation techniques and explains mental illnesses to new officers who have recently graduated from the police academy. He said this helps prevent officers using force on these kinds of citizens.

“Over the past 20 years, there’s been less folks with mental illness receiving the in-house treatment that they should… without any type of guidance whatsoever,” Lohr said. “Sometimes law enforcement finds themselves being the one having to deal with these folks. It’s critical to have this training and have an [understanding] for what these people are going through, similar to what we do with excited delirium. Even if they’ve committed the crime most of the time, it’s as a result of them not being on their medication, not being properly medicated or having some type of manic episode as a result of the mental illness itself.”

The LPD has held the training quarterly or has sent its officers to CIT training since 2006, according to Lohr. The training this week included officers from the Troup County Sheriff’s Office and police departments in Fairburn and Marietta counties also attended.

“To take full benefit of this training you need two things,” said LaGrange Police Chief Lou Dekmar. “You need to understand that you’re going to be involved with these folks. And number two, that if you don’t have the right skill sets, then the potential for this to go sideways on you very quickly is a reality.”

Part of the training included learning about Alzheimer’s and other forms of dementia from the David Marlowe, the director of programs and services for the Columbus office of the Alzheimer’s Association.

“You need to identify folks who are wanderers with Alzheimer’s or a related dementia,” Marlowe said.

Lohr said he thinks the training decreases the use of force incidents LPD officers have been involved in.