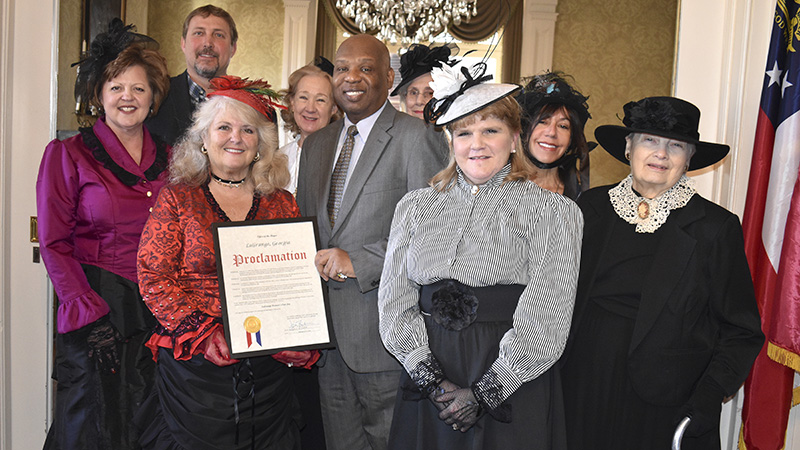 Betty Johnson, second vice president in charge of programming said the club was founded by Sally Cary in 1908 to promote culture and make LaGrange the cleanest city in Georgia.

“We had a restroom that we looked after,” Johnson said. “When we say a restroom, it was literally a place for women just to come and freshen up and relax from their train rides at the train depot.”

The club also founded the first library in the city, which was on Church Street, and the first sanitation service that used a garbage wagon, according to Johnson. The group also brought in the first county doctor and nurse and sponsored a toxin-antitoxin against diphtheria, she said.

In 1942, the club was presented Bellevue by the Fuller E. Callaway Foundation, and the woman’s club oversees its upkeep. The house is the only national historic landmark in LaGrange, Johnson said.

“Most of our activities center around upkeeping Bellevue,” Johnson said.

Since 1908, the club has also supported the arts, such as helping with children’s programs at the library and the Malais Fund, which is for young musicians, according to Johnson. On Thursday, some of the women of the club reenacted the first meeting on Feb. 11, 1908.

“As I was listening and observing it came to me that this is a hidden jewel that LaGrange has,” McCamey said.

“[The club is] not sounding the trumpet, but [the club is] doing the work.”

Johnson said the club has been able to carry on for so long because of its connections.

“The woman’s club over the years has been an initiator,” Thom said.

McCamey said he was honored to come to the club meeting Thursday.

“Just to be here with [them] and be in [their] presence today, it’s awesome,” McCamey said. “Just to see all the work [they] do and talk about social graces, teaching our children and setting the example and letting them know how to conduct themselves and how to present themselves. That’s so important.”

Warner’s work is inspired by the world around him