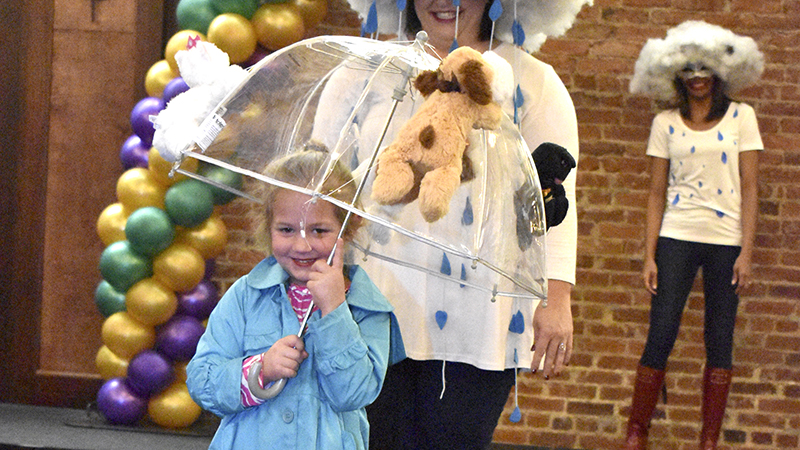 Tracy Ward won as hot stuff, where he threw Red Hots at the audience and wore chili pepper lights with hand warmers hanging off his jacket pockets.

Alexis Paul won runner-up in the people’s choice award for her costume as the as one night stand, a green dresser complete with a lamp and clothes hanging out of drawers.

“They asked me to do it for charity, and so I thought it was a good idea and (to) raise money for the kids who couldn’t pay for [college],” Ward said. “I didn’t think about winning or anything it was just about trying to raise money for a good cause.”

“The scholarship is not just for women, it’s for men and women who choose to go into this field. We’re just an organization that recognizes outstanding women educators,” Whitley said.

The remaining money after the scholarships will help pay for students Advanced Placement exams, according to Whitley.

“We try to promote charitable and educational projects throughout the whole year, to sponsor scholarships, to further and maintain worthy standard in the field of education and to cooperate with worthy community programs related to education and charity,” she said.

Carol Cain, retired Troup High School English and theatre teacher, dressed as star bucks, which entailed having stars and fake dollar bills on her clothing with Starbucks products accessorizing it.

“It was fun to just take the two words ‘star’ and ‘bucks’ and get creative. Our friendly folks at Starbucks helped me with supplying my lovely purse, my cuffs, my earrings and my hat. The rest good sticky stuff,” Cain said. “I’m a long-time theatre performer, so it doesn’t take much. Give me a show, give me a part and I’ll play it.”

She said she wanted to join the show after hearing that it would help students.

“Old teachers, we always love a good cause if it involves students,” Cain said. “They didn’t have to twist my arm too much. I said ‘yes, I’ll do it.’ What a great and fun event for the community to have a little fun and of course, teachers makings f’s, faux pas, fun, frolicking whatever it takes, we had a good time. The participants had a good time upstairs getting ready, so I hope the audience enjoyed the show.”

Beta Iota member Kathy Hagler said she doesn’t know how much money they raised, but that it should be more than $5,000. She said they hope to do the show next year.