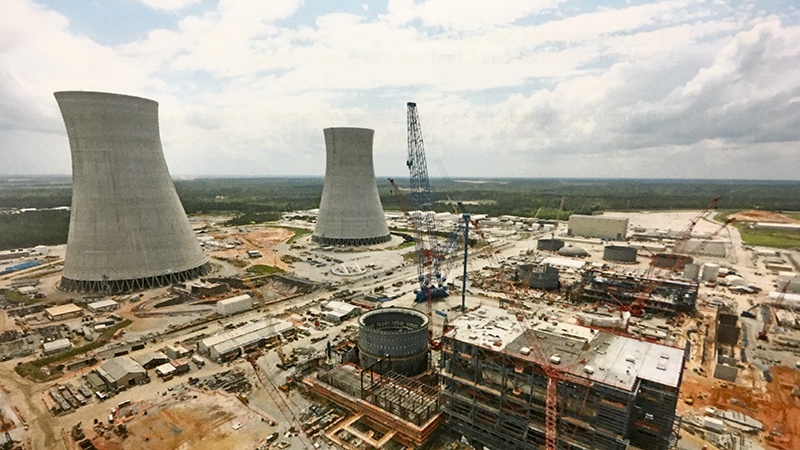 Many Georgia cities, including LaGrange invested in the Vogtle Electric Generating Plant expansion in 2007 through MEAG in order to gain another source of power in the future. --Contributed

Construction is underway on an expansion at Vogtle Electric Generating Plant in Waynesboro, and the LaGrange City Council discussed Tuesday whether the city’s investment in the plant will help ease rising utility prices.

Only three of the current council members — LeGree McCamey, Tom Gore and Willie Edmondson — were in office when the council voted to purchase 30 megawatts of the Vogtle expansion in 2007. The Municipal Electric Authority of Georgia — which LaGrange, Hogansville and West Point are all part of — purchased a total of 22.7 percent of the project. LaGrange’s share in the project is 1.4 percent.

“Over the next 10 years, our cost is only projected to go up about 1.2 or 1.3 percent over ten years,” utilities director Patrick Bowie said. “You can see that is a tenth of a percent each year over the next ten years. … Those costs that we have are going to be very, very stable. As you may recall when we bought into this plan, we bought 30 megawatts. That is enough to run 300,000 100 Watt light bulbs, just to give you an idea.”

LaGrange sold 22 watts of that to the Jacksonville Electric Authority and Power South in Alabama for two thirds of the cost. LaGrange is only expected to pay for about half of the power from its share of the project due to the deal, according to Bowie.

“With all the revised costs, it is about a $24 billion project, which I think makes it the largest single construction project in Georgia history in terms of actual dollars,” Mayor Jim Thornton said. “What a lot of people don’t realize is the City of LaGrange is on the hook for 1.5 percent of that, so that is probably $350 million. We are on the hook for that, but we also have a huge asset that is going to generate electricity for 60 (or) 70 years or more.”

City leaders hope that investment will result in stable utility prices for generations to come.

“We feel pretty strong that it is going to end up being a good project for not just our kids, but our grandkids and our great grandkids,” Bowie said.

However, there were several points in the process where there were concerns that the city might end up at a loss on the project due to slow progress and problems with other investors. On March 29, 2017, Westinghouse, which was over design and construction of the expansion project, filed for chapter 11 bankruptcy, and some worried that the expansion project would go under without them. The project was already behind at that point, and if it had gone under, Georgia Power and MEAG would have been on the hook for Westinghouse’s share of the project.

“Toshiba owned Westinghouse and had made a parent guarantee on this project of 40 percent of the base contract, which meant that if the project was not completed, Toshiba had to write a check to the co-owners of Georgia Power and MEAG Power for 40 percent of the base contract price,” Bowie said. “That is a whole lot of money, $3.68 billion dollars. If Toshiba went bankrupt, we would not see that money.”

In December, Toshiba opted to pay the full $3.68 billion commitment to the project. Bowie said that LaGrange’s share of that was $1.5 million, which can now be put into the project.

Bowie had also worried that the project could be delayed by this financial uncertainty. He said that when the city invested in the project, a large part of the plant expansion was projected to be online in 2016. In December 2017, a new plan was released to revise the completion date to November 2021. That delay had disastrous potential because it meant that if Congress did not extend nuclear production tax credits, the project could lose a major source of funds.

“Because of the delays, Georgia Power was not going to meet the deadline to receive what they call production tax credits,” Bowie said. “Back in the energy bill of — I think it was 2005 — Congress put in place production tax credits which meant that as these new power plants generated power, you could take a tax deduction for the amount of power that was generated. It was a very big incentive, and if Georgia Power lost that, it was going to put a lot of burden on Georgia Power.”

On Friday, Congress passed the Bipartisan Budget Act, which included an extension on the tax credit that Plant Vogtle will need to move forward. Bowie estimated that those tax credits could be worth an estimated $561 million to MEAG.

“That is something that has been on the books and has been important to the state of Georgia and our communities to look at how we are going to generate affordable electricity for current users and the next generation,” said Rep. Drew Ferguson, in an interview with the Daily News on Wednesday. “This was something that was important that we got done, and I was proud that the Georgia delegation was able to help be a part of getting that across the finish line.”