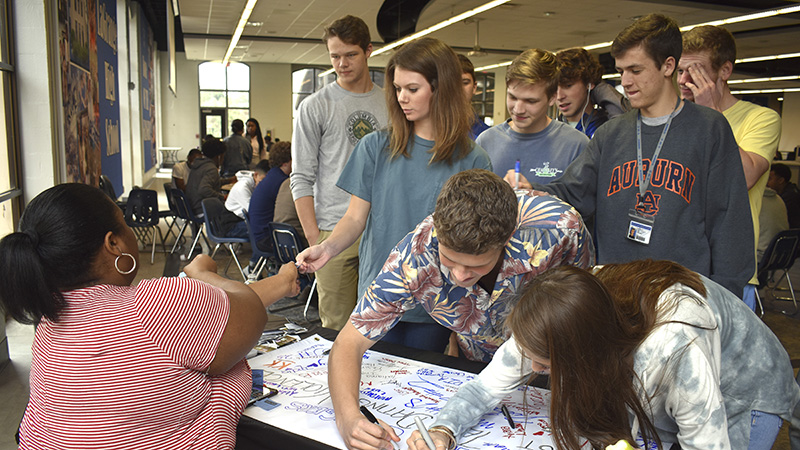 High school students sign a banner pledging to not be abusive in relationships in the LaGrange High School lunchroom on Thursday. --Gabrielle Jansen

“February is Teen Dating Violence Awareness and Prevention Month, so we’re really gearing our message around that,” Ford said. “We want our kids to know that they need to be in happy and healthy relationships, or no relationship at all. If it’s not happy, if it’s not healthy, you need to reevaluate some things. Today we’re asking them to take a pledge that they will not be abusive in their relationships or their friendships.”

The banners will be hung at Lafayette Square on Monday along with red flags. Ford said representatives from the shelter hold the banner signings every February.

“They’ll be hung in Lafayette Square along with we have several hundred red flags that we stake into the ground just so we could give people a reminder to not ignore red flags,” Ford said. “And a lot of times what people do in these relationships, they become desensitized and they see it and they’re like ‘Oh, yeah, I know it. He wants to keep me away from my family. She wants to keep me away from my friends.’ And they see it but they don’t recognize it as abuse. So, we’re telling them ‘Don’t ignore the flags. They’re in front of you. Recognize it as a red flag and then evaluate that.’”

Ford passed out materials on dating violence and how to recognize red flags in relationships, such as extreme jealousy or monitoring.

“[They’re] in high school, that’s a little extreme, so I want them to know those types of things aren’t healthy,” she said.

Students who signed the banner could also put in tickets for a drawing on Friday.

Ford said she goes to schools to teach about relationship violence. She said students as early as 12 have started dating.

“As early as 12 years-old, your little 12-year-old brother, sister or child is out here possibly having a boyfriend or girlfriend,” Ford said. “(When) I survey my students, and they’re mainly freshman, but I have [about] 80 percent who say they have dated or they are in a relationship. That was out of 400 students, so that’s a big number, and they are dating. We really want to make sure they are dating in a healthy manner.”

Dating violence affects one in three students including boys and girls, according to Ford.

“When you look at those numbers, you’re looking at 1.5 million teens on an annual basis in the U.S. reporting teen dating violence,” Ford said. “That’s your physical abuse, your sexual abuse, emotional abuse and even stalking, and more importantly now, digital abuse. They’re sending inappropriate photos, they’re receiving inappropriate photos. They try to post them online when they get upset at their dating partner because they’re mad, and it’s their revenge method, but it’s illegal, so making sure that they’re aware of that is important.”