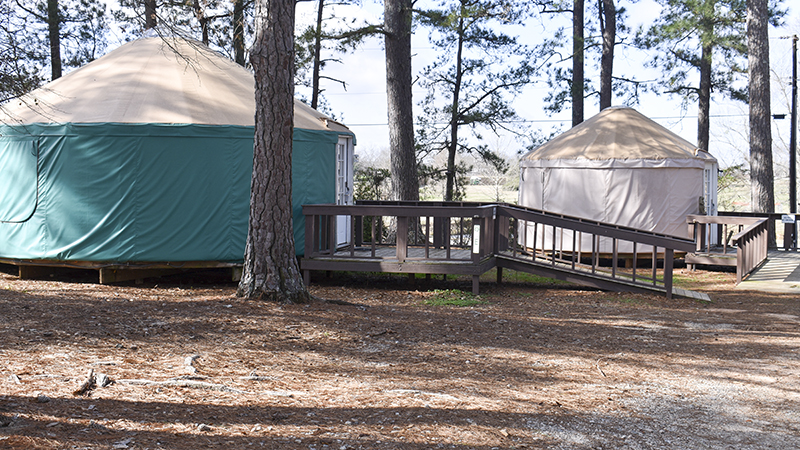 As the weather gets warmer and spring break approaches, camping may be an option for vacation plans. Among camping in tents or RVs, living in a yurt is also a popular modern option because of its wooden structure and floors with a tent-like exterior.

Yurts originated in Asia and were not as permanent as modern ones, according to Marcus Lauren, general manager of Pine Mountain RV Resort.

“I think they started with the nomads in Asia on the steps in eastern Asia. The nomads would set them up where they were solid enough to live in, but were temporary enough to be able to tear down and move when they moved,” Lauren said “Today’s yurts follow the same principle, but they’re using modern building techniques and technology, so they’re far more permanent in style and far more stable.”

“Before, they would have used branches or sticks, but [modern yurts are] all meant to stay in a permanent position,” he said. “While it can be removed, it’s not like nomadic ones.”

Yurts have the quality of a tent with the floor and space of a cabin.

“They’re popular for many reasons. A lot of folks like to stay in tents as opposed to a cabin, but would prefer to stay in a bed,” Lauren said. “They can kind of have their cake and eat it too. They have the best of both worlds and the price point is also lower than perhaps renting a cabin or whatnot.”

Yurts can also include electricity and air conditioning.

Smaller sized yurts can hold up to about six people comfortably, Lauren said.

“It’s glamping. That is a new term in the industry is glamping,” Lauren said. “ (People say) ‘I like tent staying, but I’d rather stay in a place where there’s a real bed.’ And that’s a lot of folks’ idea today of camping.”