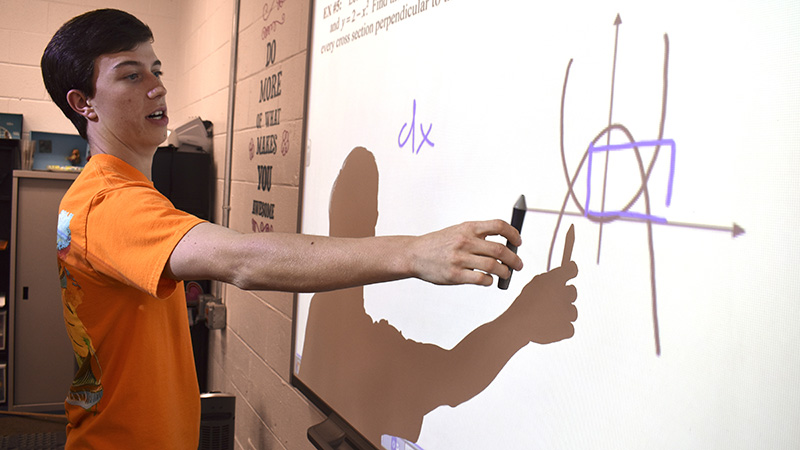 LaGrange Academy senior John Whitlow works a math problem Thursday. Whitlow is one of two STAR student winners in Troup County and plans to participate in Georgia College & State University’s dual degree program, where he will major in physics at the college and complete a bachelor’s degree in chemical engineering at Georgia Tech. --Gabrielle Jansen

EDITOR’S NOTE: This is the first of two stories featuring STAR award winners from Troup County.

For LaGrange Academy senior John Whitlow, most contests his family enters ends in them tying with someone else. So, it was no surprise to him when it was announced that he tied with Troup High School senior Anna Davis for the Student Teacher Achievement Recognition (STAR) award at the local Rotary Club Meeting Wednesday.

“It’s sort of weird but everything that happens in my family normally happens in a tie. (Jennifer), my sister was homecoming queen, and it was a tie,” Whitlow said. “It was first time there was ever a tie, and so as soon as the announcer said there was a tie, I sort of got a gut feeling that it was me. It sort of just made sense to me.”

To be nominated, students had to have the highest score in one sitting on the SAT taken in November of their senior year and be in the 10 percent or one of the top 10 students in their class based on grade point average.

Students who were nominated for the award also had to nominate one of their teachers as a STAR teacher. Whitlow nominated his upper level math and science teacher Jennifer Smith.

“Mrs. Smith, I’ve always known as being a great math teacher, and math is one of my favorite subjects. I’m happy to have her and she helped me a lot on the SAT. I was very confident going in there, and when I went in there I didn’t have any issues with it,” Whitlow said. “I was very confident with my score, and so knowing how much she helped it was not a hard decision on who was going to be my star teacher.”

Whitlow said he likes playing any sport and is a member of the LaGrange Academy’s baseball team.

“I would love to stay in LaGrange after I graduate,” Whitlow said.

Whitlow’s teacher, Smith, used to work in chemical engineering, and joked that she warned him it was not an easy field.

“I laughed when I said ‘are you sure you want to do this,’ but he definitely knows what he’s getting into and how hard it’s going to be, and he’ll do well in it,” Smith said. “It takes a different kind of sort to be able to do it, and I see in him the determination to be successful. I feel like he’s going to do a great job, and I’m excited to see where he goes with it.”

Whitlow and Davis will now advance to the regional competition that will be held in March at Columbus State University.

“John is probably one of the hardest workers I’ve ever had. John does not slack in any way, shape or form at any given time,” Smith said.

“I always know if I say ‘John I need you to do such and such.’ it’s going to be done. So, it does not surprise me in the least that he was named STAR student for the school or for the county.”