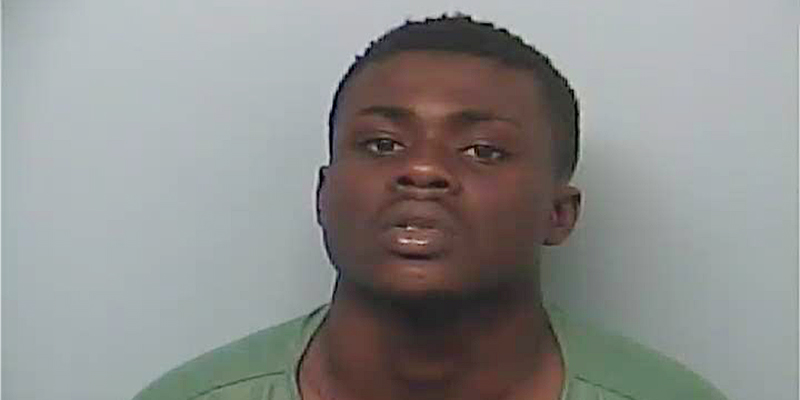 A 19-year-old male led police on a six-hour chase through the woods Friday before being apprehended around 8:30 p.m.

The man, identified as Paul Lamar, was in the backseat of a vehicle that was pulled over on Interstate 85 Northbound for speeding around 2 p.m. Friday. As Georgia State Patrol pulled the car over, Lamar jumped out and ran through the woods toward the Stewart Road area, according to Trooper First Class Brad Turner with GSP.

As they were tracking him with a K-9 officer, law enforcement officials recovered a bag of marijuana and a stolen pistol with a 30-round magazine. The pistol was assigned to LaGrange Police Chief Lou Dekmar and was stolen in 2015, according to Lt. Dale Strickland with the LPD. Strickland said the gun was stolen when suspects broke into Dekmar’s work vehicle in Duluth, when he was teaching a class.

“We kept spotting him. He’d come out to the interstate and somebody would see him and he’d run back in the woods,” Turner said. “We just kept going north. We pretty much cornered him and had a real good perimeter set up at Mountville Hogansville Road.”

Lamar was seen trying to drink water from an outside faucet at a house and officers were able to circle him.

“I think the homeowner pointed at him and told him to freeze and get down on the ground, and he ran,” Turner said. “We were able to set up a pretty good perimeter. And the city K9 apprehended him in the woods.”

“This was the best, outstanding teamwork ever. It was wonderful,” Turner said. “We had so many officers from so many different agencies.”

Turner said Lamar received medical treatment for his K-9 bite and was taken to the Troup County Jail.

Lamar had no previous warrants, Turner said. He was charged with VGSCA-possession of marijuana less than one ounce, obstruction of officer and theft by receiving, according to the Troup County Sheriff’s Office arrest/release reports. His bonds totaled $3,000. He has a listed address for Clermont, Florida, but Turner said he Lamar now lives in Atlanta.

There were three other passengers in the car, also with Florida addresses. Dakeem Jones, 27, was the driver and was charged with driving on a suspended/revoked license and speeding. Jones’ bonds totaled $2,000, and he has bonded out, according to the arrest/release reports.

Officers searched the car but didn’t find anything else.