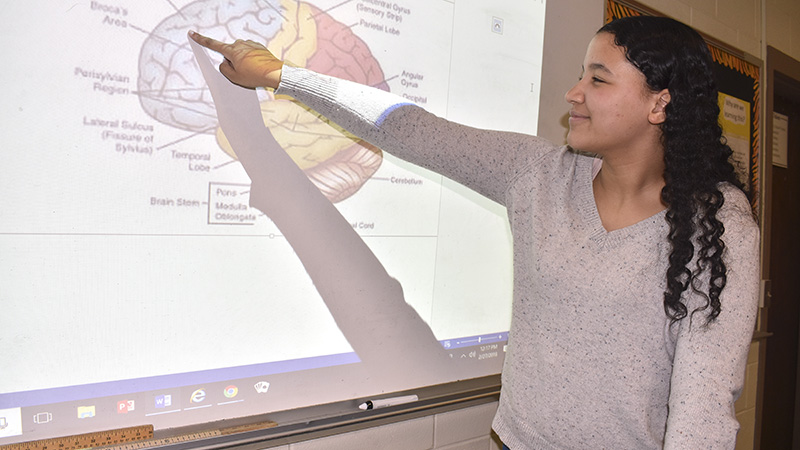 Anna Davis points at an image of a human brain in a Troup High School classroom on Wednesday. --Gabrielle Jansen

This is the second of two stories featuring STAR award winners from Troup County.

She was more than glad to share the focus with LaGrange Academy senior John Whitlow for the county’s STAR award at the LaGrange Rotary Club meeting last week.

One student from LaGrange Academy, Lafayette Christian School, Troup High School, LaGrange High School and Callaway High School were named STAR students from each of their schools and were nominated for the award.

To be nominated, students had to have the highest score in one sitting on the SAT taken by November of their senior year and be in the 10 percent or one of the top 10 students in their class based on grade point average.

Students who were nominated for the award also had to nominate one of their teachers as a STAR teacher. Davis nominated her science teacher Janet Carnes.

“As soon as they told me I had to choose a teacher, she was the one that came to my mind because I took two classes with her, and she just obviously cared about her students,” Davis said. “Because some teachers, if you’re doing bad they blame it on you. They don’t care, but she really tries to help people who don’t understand or if they need extra help, stuff like that. She really works with us.”

Carnes said she was surprised to be named by Davis.

“She has what I call quiet strength. She has a keen mind, a flexible mind, she’s curious. She’s ready to work with others and get things done, and I think we see that in her academic achievement and her life,” Carnes said. “So she works very hard and I appreciate that and I am blessed to know her.”

Davis and Whitlow will now advance to the regional competition that will be held in March at Columbus State University. She is currently dual enrolled at that university.

Davis participates in her school’s show choir and is in National Honor Society.

After graduation, Davis plans to attend Yale and major in psychology. She said while the future is far off, she would eventually want to get a doctorate and work as a psychiatrist.

“Then in tenth grade I took AP psychology here just to see if it was something I was interested in and I definitely was. It’s one of my favorite classes I’ve ever taken because the subject was so interesting. I tried to take it again when I did dual enrollment, but they wouldn’t let me because I had already taken it here,” Davis said. “I just love everything about it, the whole subject, just how the brain works, I think it’s so cool.”

She said Yale has a good psych program and is excited to attend in the fall. Davis said applying worked out with the QuestBridge nonprofit scholarship program she went through.

“I really liked the school and then the fact that they worked with the scholarship program was like a cherry on top,” Davis said.

Davis is the daughter of Jennifer Babb and Terrance Davis.

Storytelling festival is this weekend