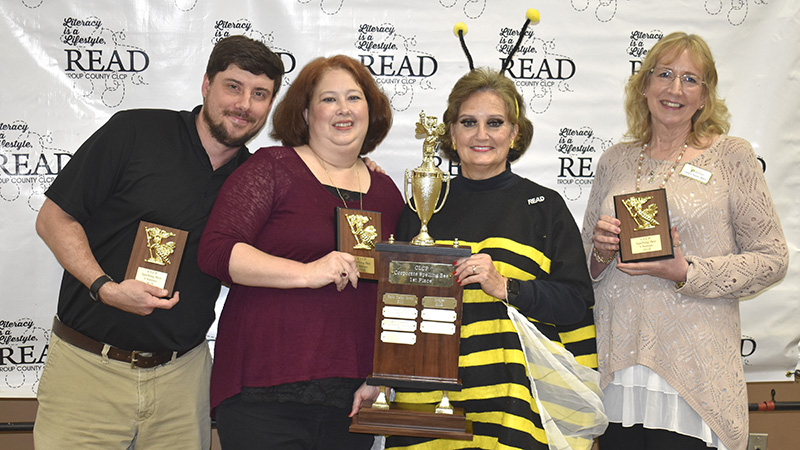 The contest came down to that team and the JSL Sustainer Queen Bees, made up of Kelli Farrell, Catherine Rodriguez and Cynthia Welch.

Because the contest ran out of words, the two teams ended up writing five words given to them to break the tie, which were sauerkraut, cartouche, sequacious, psilosis and horripilation.

Miller said this was the longest spelling bee he’s participated in because the difficulty ramped up quickly. Some of the words included were slumber, invitation, pestiferous and drepaniform.

“We’ve never gone to this level before,” Miller said. “Usually it ramps up a lot more gradually, but things got nasty very quickly.”

Pugh said she felt like she had beginner’s luck since it was her first time participating.

Miller said the team will continue to compete for the college.

“We hope to make this a tradition,” Miller said. “This is our campus. We need to bring it home more.”

In addition to the competition, the event also recognized Tom Gore, Jim Brennan and Arthur Robinson for their annual participation. Debbie Burdette, executive director of the Certified Literate Community Program, said the three were inducted into the speller’s hall of fame.

“They have been in just about every spelling bee, and so they were put in the speller’s hall of fame of perpetual spellers,” Burdette said.

Teams could dress up in costumes to match their themes, such as WellStar West Georgia Medical Center’s WellStar Wizards dressed in scrubs and LaGrange College’s Spellvenger’s dressed in costumes related to their departments, complete with political science professor John Tures holding a miniature Jimmy Carter bust. He said it was in his car trunk and figured he would bring it to the event.

“We’re the Spellvengers, kind of like the Avengers. Everything we have is related to our profession,” Tures said.

The competition let teams use a pass to send a word they couldn’t spell to another team. Tures and his teammate, physics professor Kevin Ludwick, said they enjoyed passing words to their wives who were on other teams.

“It was fun to pass challenges to our wives and for them to throw challenges back at us,” Tures said.

Robinson said he had a good time.

“It was a lot of fun. I think they did a good job of the selection of words,” Robinson said.

“Some years, they have too many easy ones and some of them are impossible words.”

Burdette said it was a successful spelling bee.

“We got to recognize some terrific organizations and had three spellers who we entered into the speller’s hall of fame,” she said. “It’s just another great fundraiser and event for the community.”