Number of euthanized dogs on decline, but more than 1,200 were put down at shelter in 2017 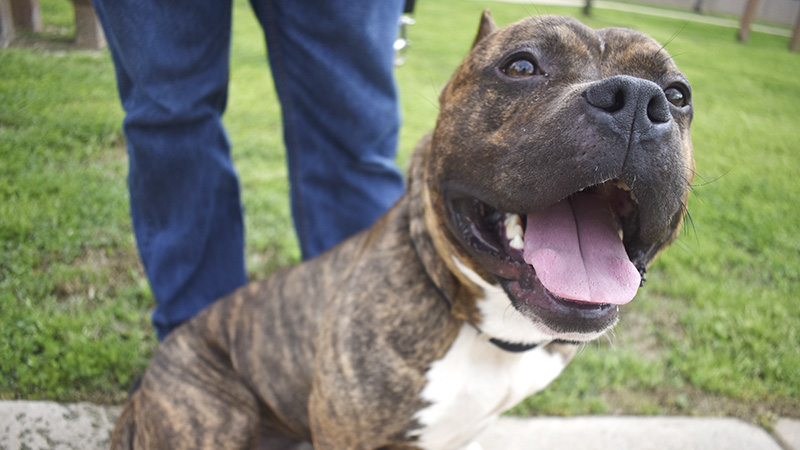 Chevy, one of the humane society’s dogs, was adopted Thursday. --Gabrielle Jansen

The number of euthanized animals at the LaGrange Animal Shelter has been decreasing in the last five years, but more than 1,200 were still euthanized last year, according to the LaGrange Police Department’s annual public safety report.

“During the 2016-2017 year, we had several hoarding cases where we had to assist Troup County marshals or Hogansville Police Department where I know one house had 56 feral cats in it,” said LaGrange Animal Services Supervisor Chris Bussey. “So, the hoarding cases play a big role into the number, and so do the dog fighting cases.”

Last year, Bussey said the animal services assisted in three dog-fighting and six animal hoarding cases. In some of those hoarding cases, even rabbits, ferrets, hamsters, turtles, snakes and even a parrot got picked up by the shelter.

The shelter is operated by three officers. In addition to working hoarding cases, the animal service also handles calls for stray dogs, animal cruelty, unregistered pit bulls, tethering and removing diseased animals from the roadway, according to Bussey.

Most animals who get euthanized are usually sick or aggressive, Bussey said.

They also have to euthanize animals when the shelter gets over populated.

In 2017, the shelter received 6,525 calls for service and a total of 1,265 animals were adopted, according to the department of public safety annual report.

The summer is the busiest time of the year, Bussey said.

He said officers may work 15 to 30 calls a shift during the summer months.

“It wouldn’t be uncommon for us to take in 40 animals a day here at the shelter,” he said. “They’re calling us for more and more every day for cruelty calls.”

The animal service works in the same building as the LaGrange-Troup County Humane Society. Bussey said the two organizations work together to decide which dogs are a good fit for the humane society and will be adopted quickly in Troup County, so they aren’t as overpopulated.

According to the society’s website, they look at the dogs’ temperaments and history and have them spayed or neutered and vaccinated. Once with the humane society, the dogs will stay with them until they get adopted.

As of Friday night, the humane society listed 16 adoptable dogs on its website.

“Last year was the first year in 10 years that I’ve been here where they pulled over 100 animals from the animal shelter to place in their program,” Bussey said.

Mandi Bono, the executive director of the LaGrange-Troup County Humane Society, said that while the numbers of euthanized animals are sad, the problem lies in overpopulation in the community.

“We need people to spay and neuter their pets, so that we’re not taking in up to 40 dogs a day,” Bono said. “The numbers are sad, but it’s a community problem, not a shelter problem.”

Bussey said that while they do euthanize some animals, they also work with no-kill shelters, such as the Puppy Pipeline, and send animals to other humane societies.

Recently, the shelter has partnered with Auburn University to send their cats and dogs to get spayed or neutered. The cats are then sent to Petsense and cost only $16 to adopt, Bussey said. All 46 cats who have been placed in Petsense since the middle of January have been adopted.

The LaGrange City Council voted in December to give city manager Meg Kelsey the option to waive adoption fees when the shelter becomes overcrowded to help lower the euthanasia numbers.

Another issue at the shelter is that it’s not often that owners pick up their animals once they get taken in by the animal service.

“We find the dogs just roaming the street,” Bussey said. “A lot of people don’t know to come here to look for their pets. We’re usually the last spot they come looking for their animals and its usually here.”

Bono said owners need to look at the shelter first for their animals before they get adopted by someone else.

“I really want this to be the first place where people look when their pets go missing, a lot of people don’t know that they’re up here, and they’ll come by weeks or months after their dog has been brought it,” Bono said. “And by then we’ve either adopted it, sent it on a rescue, something like that, so we miss the opportunity to reunite those pets with their owners.”

Bussey wants pet owners to also know they should keep their dogs on a trolley system or inside a pen. They should also make sure the animals have food, water and shelter.