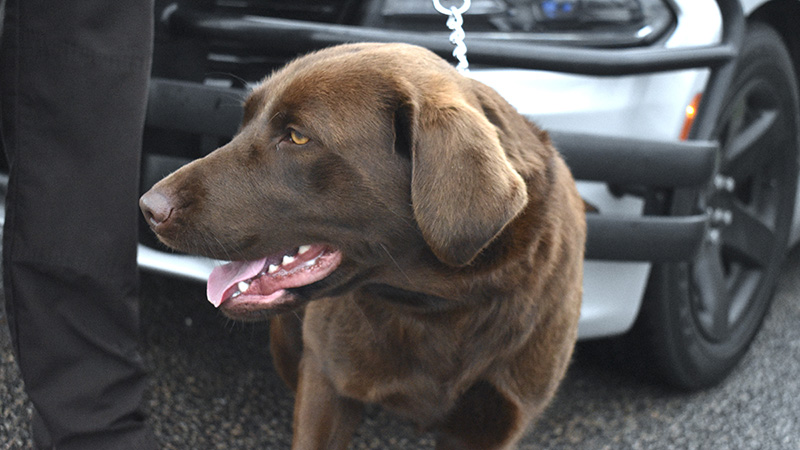 The newest addition to the Troup County Sheriff’s Office came in to work enthusiastic and on four legs Monday. The office added Stella, a two-year-old chocolate labrador, as a member of its Explosive Detection K9 team to partner with Deputy Adam Richardson.

“Everybody says [labradors] have a better nose,” Richardson said. “They can smell better than the other dogs, and a lot of military dogs are labs.”

“They basically supply the dog and the training,” Smith said. “On the flip side of that, he’s basically on call through GEMA 24/7 if there was a deployment in the state that they need him to go, then he’s responsible. Stella’s a resource for us here, but is also around the state.”

Stella is trained to detect at least 20 types of explosives. She and Richardson will do pregame sweeps in Atlanta for games, such as the Super Bowl next year.

Richardson and Stella went through five weeks, or 200 hours, of training to become certified. Richardson said he is looking forward to his bond with her.

“We stayed in a hotel room for five weeks together, so [I’m just looking forward to] just having a partner constantly,” Richardson said.

In addition to searching for explosives, Smith said Stella can be used for threat calls and locating guns discarded after being used.

Richardson previously worked on patrol at the sheriff’s office. He has worked for the office for nine years and said he is excited for the new challenge.

“It’s life-changing,” he said. “The same day I picked her up, I found out my wife was pregnant, so I got two kids in one day.”

The TCSO’s other K9 unit is composed of Biko, a Dutch shepherd, and Lt. Nathan Taylor.