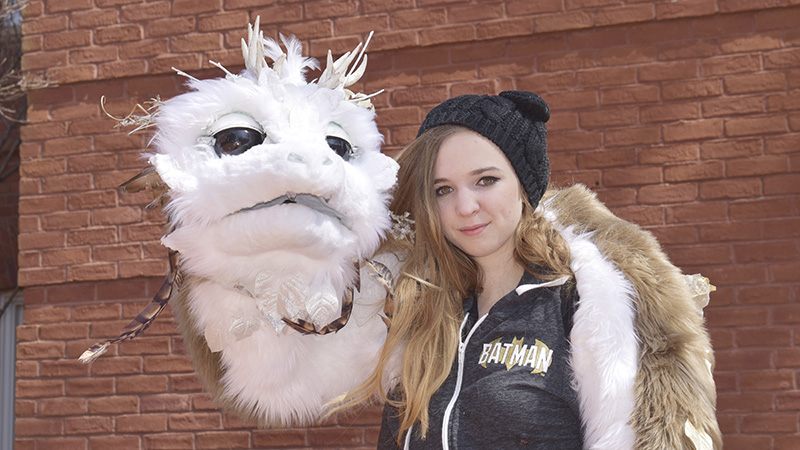 LaGrange College junior Hana Henry can add dragon tamer to her resume along with puppetry skills. The 22-year-old constructed a blinking dragon puppet that runs as long as her wing span for her puppetry: design, construction and performance course, which has since gained attention on her YouTube channel, Tiny Badger.

Her video on how to construct it has already had more than 184,000 views Friday afternoon. Henry said she made the video for her class and thought it would have had one or two views.

“I feel like the things I put the least amount of effort into get the most notice online,” Henry said. “I put no effort into that video. I had no script. I went ‘uh, yeah, um and please and stuff. Look at the dragon I made.’ And somehow it got popular.”

Henry, an animation and ink and paint major, said she already had experience making mascot costumes with her own business, Badger Factory. She started making costumes when she was 15, started selling them when she was 17 and started her business when she was 20.

Henry said at this point, she’s lost count of how many costumes she has made. She said she’s even made an alien cow costume for someone out of the county.

“I make them for fun,” Henry said. “I’ll just go on social media and be like ‘hey is anyone wanting a mascot costume right now?’ and I’ll get two or three people who are interested and put down down-payments.”

Her dragon, Noodles, was given its name when she made up its backstory. The dragon was named by a child it met since kids give simple names to creatures.

“It’s funny because I will give things working titles and I started called her Noodles because she looked like a snake,” Henry said. “She didn’t have any legs and then the name just stuck. She was originally going to have a cool, regal ‘Lord of the Rings’ type name, but then Noodles is the one that stuck.”

Since creating Noodles, Henry hopes to make a children’s book about her and integrating the puppet into it. Henry said she would love to break into special effects or work in children’s television or theatre after college.

“Right now, I am applying for an internship at the Atlanta Center for Puppetry Arts,” Henry said.

“And I really hope I get that because they have ties to the Jim Henson Foundation.”

She said she would also like to get into animation.

Henry said she hopes other artists who are struggling to get attention for their work will keep going on with their art.

Henry is from Houston, Texas. She said her mother is an alumna.

Election 2018: Looking at who qualified in each local…