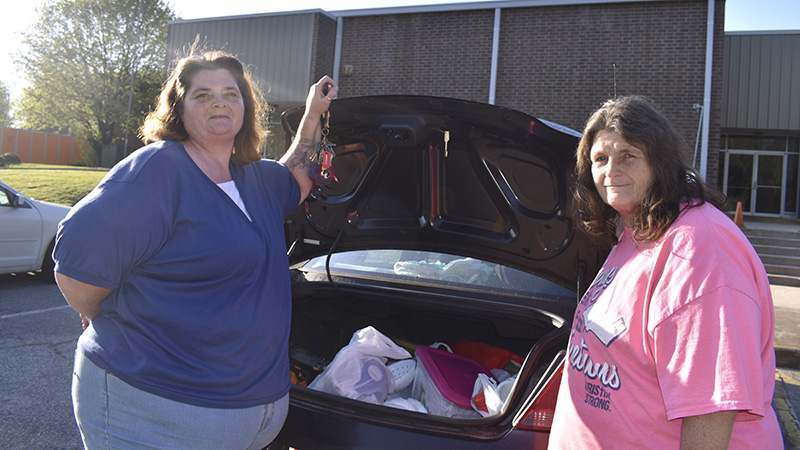 Renay Hinson and Pam Daniel shows off Hinson’s trunk, which is full of clothes, food and hygiene items that she gives to help homeless people in Troup County. --Gabrielle Jansen

For LaGrange-Troup County Homeless Coalition volunteer Renay Hinson, helping the homeless is an everyday interaction, not just a volunteering opportunity. She said she has given homeless residents in Troup County and Valley, Alabama, her cell phone number so they can call her whenever they need her.

A Valley resident, Hinson said she volunteers at the coalition’s warming center since there aren’t similar programs where she’s from. She said she started volunteering after she started attending Davidson Baptist Church in West Point four years ago.

“Three years ago we started working with the homeless, and I’ve just done it ever since because I feel like that’s where God wants me to be,” Hinson said. “That’s what he wants me to do.”

“We’ve got my whole family involved in it,” she said. “It just started off as me and my mom, and then our daughter got involved. Then my husband got involved because he didn’t like us doing it without a man around. Then my boys got in it.”

Hinson keeps clothes, food and personal hygiene products in the trunk of her car so she or her family can help any homeless person they see.

“If we see them, we’ll help them,” Hinson said. “We give them clothes and food.”

At the warming center, Hinson said she helps the homeless check-in and make sure they have clothing when they need to shower.

The center opens when the temperature at night drops below 37 degrees. Hinson said on cold nights, they have about 15 people come, but have had up to 23 people.  Hinson said one of the challenges of volunteering with the homeless is knowing they sometimes don’t have a place to sleep at night.

She said she enjoys spending time with them because they appreciate it.