Rain holds off for 5K race 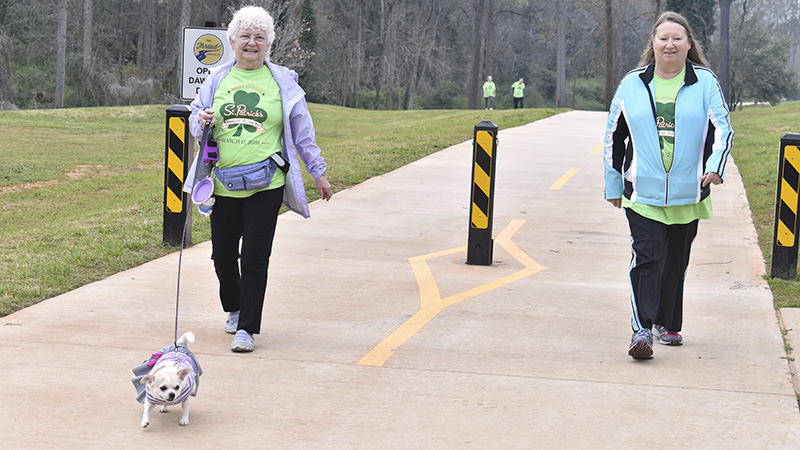 The threat of possible rain resulted in runners sprinting earlier than planned at the St. Patrick’s Day 5k Fun Run Saturday morning. The race, which was held at The Thread at Granger Park, was hosted by LaGrange’s City Slicker’s Relay for Life Team to support the Troup County Relay for Life Team.

The event had 75 participants according to LaGrange City Slickers captain Brenda Leverett.

“I think we did really well,” Leverett said. “A lot of people were afraid of the rain, and it’s opening day so that kept some out.”

Leverett said this was the first time the group has held a 5K race.

“I’ve been the team captain for 12 years,” she said. “We’ve always done fundraisers with food and such, and we wanted to do something proactive for our city employees also.”

City employees were given credit for their health screenings for participating, according to Leverett.

Members of the LaGrange Fire Department grilled hot dogs and hamburgers for participants. Firefighter Ellen Shults said she had a good time running against her coworker Lamar Casper.

“He didn’t know it, but we were racing and I beat him at it for some fun competition,” Shults said.

Members of St. Mark’s Episcopal Church, which is right next to The Thread, helped with the coffee station.

“It’s very gratifying to see what I and those of us who founded [The Thread] believed it would be come true,” said Friends of the Thread Vice President Bob Goehring.

While it didn’t rain in the morning, runners did come out for community support.

“Getting wet is OK,” said participant Kim Deloach. “We can take a little rain for the cause.”

Leverett said the relay team wanted to use The Thread as the only section for the race since it is beautiful.

“We have a lot of people who use it too,” Leverett said.

Tiffany Storay said she enjoyed using The Thread for a 5K.

“It’s fun to do on The Thread, you don’t have to deal with the traffic,” Storay said.

Leverett said she is passionate about finding a cure for cancer because of all of the city employees who have died from it and her father who passed away from leukemia five years ago.

“It’s a great cause,” Leverett said.

“We’re trying to find a cure.”