Helping Hand for the Community 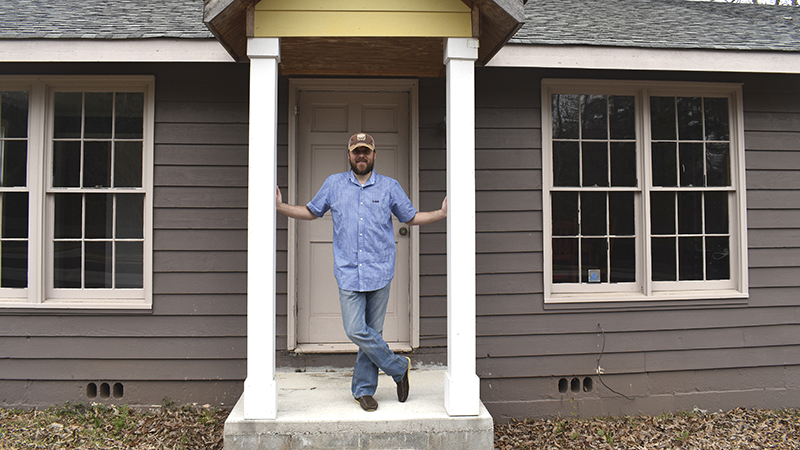 Nicholas Gooden improves the community one house at a time. --Gabrielle Jansen

Helping Hands of Hope Ministry, or H3, is constructing its way through LaGrange, fixing one house at a time. The nonprofit helps fix homes with immediate needs for struggling homeowners, according to executive director Nicholas Gooden.

“We define a need as anything that interferes with day to day living and so it has to be an immediate need,” Gooden said. “Like, if an elderly couple lives in a two bedroom, one bathroom house and their one bathroom is not functional, we’ll go in and fix it. It’s for struggling homeowners who have genuine needs but can’t afford to have those needs done and then we go in and do it at no cost.”

Gooden said the idea came to him six or seven years ago from God, but became a reality five years ago when he started working for a construction company in Atlanta that threw away excess material.

“At first, I started bringing it home and doing projects around the house, but then my wife kind of got angry because she said it was starting to look like ‘Sanford and Son,’” Gooden said.

Gooden said others in his church at Franklin Road Baptist Church also started telling him about the idea, and he started the nonprofit.

The nonprofit was first taken under by The Portal Boutique before branching out, Gooden said.

Gooden is a plumbing master in Atlanta and oversees about 20 different subdivisions. He has volunteers who can do roofing and has called in an electrician at times.

“Now when I have a job, I make a materials list and call builders in Atlanta, and they have it for me in a week,” Gooden said.

H3 did its first project in February 2015. It has completed 14 projects since, according to Gooden.

Gooden said the projects are monthly since he and other volunteers have full-time jobs.

Projects include fixing a back door that was installed wrong and leaked in water for a single mother. Gooden and his team installed a new door and door jamb for her.

The nonprofit meets the first Friday of every month with the community to decide and vote on which project to work on next, Gooden said.

Some of the challenges of running the nonprofit are paying for some of the projects.

Gooden said he and his wife, Leslie, sometimes pay out of their own pockets for the projects.

Another struggle is time management since what should be weekend projects take longer than expected. Gooden said he once had to redo a bathroom for an elderly couple because their bathtub was about to fall through the floor, and it took the group a week to complete. Gooden said he and his wife had to take in the couple at their house for the week.

A 1998 Callaway High School graduate, Gooden said he has stayed in LaGrange because it’s where God wants him to be.

“I tried running away five different times and he keeps bringing me back and planting me back here for some reason. I figured I might as well listen and move forward with what God wants,” Gooden said.

Gooden said his favorite thing about H3 is helping the people he serves.

“I love helping people, and especially people in need because they’re so grateful,” he said. “It just feels good to give back. My heart is just helping others.”

H3 Ministries is located at 1739 New Franklin Road. Gooden said the nonprofit will hold a ribbon cutting and barbecue for the community on April 14 at 10 a.m.