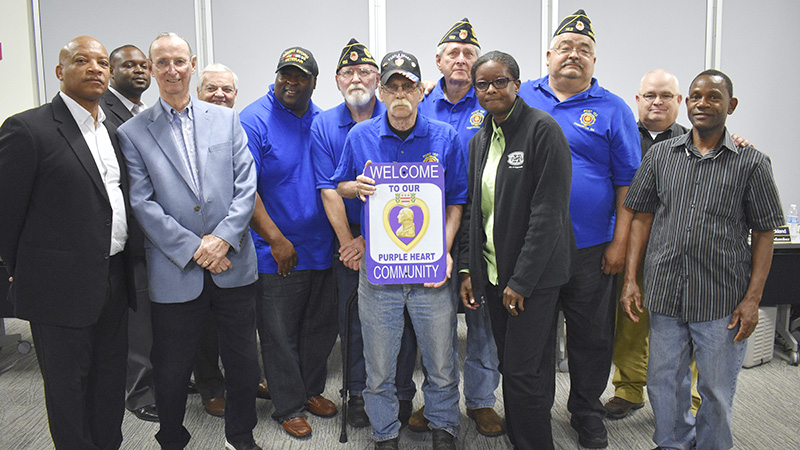 The Hogansville City Council unanimously passed a resolution to become a Purple Heart City at its meeting Monday night.

“We do appreciate this,” said post commander Winston Braswell. “We have also been working on some purple heart parking signs.”

Vietnam War veteran and purple heart recipient Leon Dyes attended the presentation. During the war, a mortar round had exploded and it hit his face, arms and legs. He said he lost his lost left eye from it. Dyes was named the post’s veteran of the year in 2017.

City Councilman George Bailey served in the U.S. Army from 1989 to 1995 and was honorably discharged as a sergeant. He said he is a member of the local legion and was approached by other members about being named a purple heart city.

“Grantville is a purple heart city, so we inquired about it a year ago,” Bailey said.

Bailey said the sign presented on Monday will be on display on the highway.

The legion will now have purple heart decals on posts for parking, which will be unveiled on Memorial Day, Bailey said.

“It’s to honor great men who have fallen,” Bailey said. “Some lost their lives and some are wounded.”

Bailey said there were no requirements for becoming a purple heart city.

“I think it was good for our community,” Bailey said. “I think when the veterans come to our city they will be honored to be recognized.”

Taylor retires after 18 years at LPD