Taylor retires after 18 years at LPD 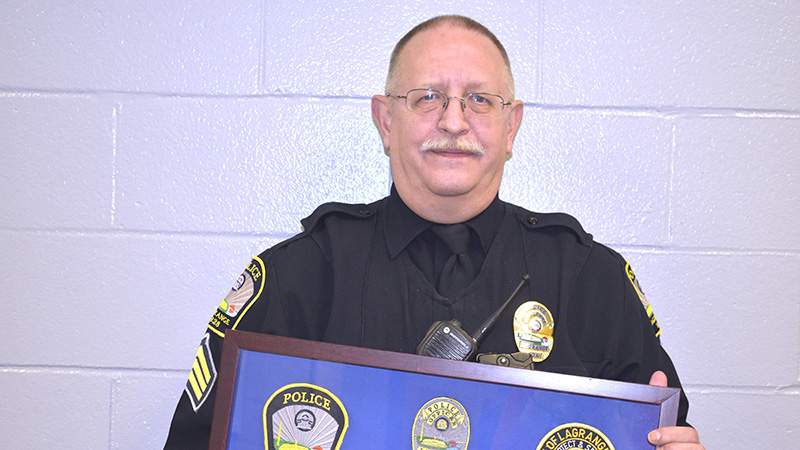 Sgt. Steve Taylor with the LaGrange Police Department officially retired Tuesday after 18 years. He plans to move back to Wyoming and learn how to snowboard. -Gabrielle Jansen

“I’m going to take an RV and go south every winter and north every summer,” Taylor said.

LaGrange Police Chief Lou Dekmar said when he interviewed him, he asked Taylor where he was from in Wyoming. Taylor said Dekmar wouldn’t know. When pressed, Taylor said Lusk, which Dekmar said he knew was is Niobrara County.

“It had just so happened that I had started my police career in a county adjacent to that county,” Dekmar said. “So, I was very familiar with the area and in fact knew some of his relatives, but did not know that while he was going through the testing that he was from Wyoming.”

Taylor originally worked as a night shift patrol officer and then as a field training officer before being promoted to sergeant in 2014. Before he was promoted, he also was assigned to work as extra security at the LaGrange Housing Authority, where he developed relationships with the residents.

“Anytime any other police officers would show up and want to talk about the problems that were going on, [residents] said ‘go find Steve Taylor. We can talk with him. We know Steve. Go find Steve. Bring him and we’ll talk to him,’” Pheil said. “That’s what I was always really impressed with. He clearly built a relationship with those folks.”

“Many of the officers who work in the police department had the occasion to either be trained by him or be supervised by him,” Dekmar said. “So, he’s left a legacy of commitment not only to our community but also internally to the men and women who serve our agency.”

Pheil said Taylor was a solid police officer who understood the rules, processes and background of law enforcement.

“[He] had a real down to earth approach to working with his squad members,” Pheil said. “And so, the squad he always worked with thought highly of him, and he was an effective leader for them.”

Taylor had previously served in the U.S. Army and retired as a staff sergeant by 2002. He was 37 when he joined the LPD.

Working at the LPD, Taylor said he learned a lot about people and that he met good ones.

“He had a wonderful ability to develop rapport and effective relationships with a broad spectrum of our community,” Dekmar said.